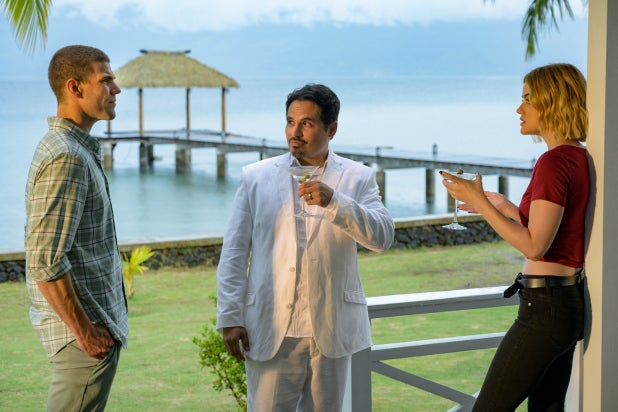 On TV’s “Fantasy Island” (1977-1984; 1998-1999), guests flew in for what they imagined would be fun and fulfillment but were subjected to what turned out to be hard-won life lessons. Audiences turning up for the new feature film version in the hopes of either fun or fulfillment will similarly go home empty-handed.

If this new movie — referred to in some circles as “Blumhouse’s Fantasy Island” — were a pilot for a TV reboot, it would come off as overwrought and underwritten but still possibly on the right track for a revived anthology series. As a movie, those flaws are magnified to the size of the silver screen, and its contrivances and coincidences come off as even less convincing.

Michael Peña slips into Ricardo Montalban’s white suit (and his silky overpronunciation of “FAHN-tah-see”) as the enigmatic Mr. Roarke, the host of the titular resort where people go to make their deepest wishes come true.

Flying in on the plane (the plane) are Melanie (Lucy Hale), who dreams of getting revenge against mean-girl Sloane (Portia Doubleday, “Mr. Robot”), her high-school tormentor; stepbrothers J.D. (Ryan Hansen) and Brax (Jimmy O. Yang, “Silicon Valley”), who want a taste of the high-rolling good life; cop Patrick (Austin Stowell, “Bridge of Spies”), haunted by the heroism under fire of his late father, a soldier; and Gwen (Maggie Q), a businesswoman who wants a do-over of her personal life and the possibility of domesticity.

In the true O. Henry fashion of the show, nobody gets exactly what they want, or they learn the hard way that they’ve wasted time wanting the wrong thing when the right thing has been within their grasp all along. That’s all well and good, and within the format of the goofy old TV show, but where this new “Fantasy Island” overplays its hand is in trying to explain the island and how it can make the seemingly impossible (the return of dead people, etc.) happen.

As was the case with “Us,” another recent Blumhouse title, the movie gets caught between explaining too much and not explaining at all; mysteries we can accept, but once the script tries to apply logic and practicality to the incomprehensible, it should either to go all-in or do no explaining at all. The old show got ridiculous with its nods to the supernatural — Montalban’s Roarke vs. Roddy McDowall’s Satan was a sight to behold — but it knew enough to shy away from details.

The screenplay by Jeff Wadlow (who also directed), Chris Roach (“Non-Stop”) and Jillian Jacobs (“Truth or Dare”) unpacks some interesting ideas early on, from the creepy undercurrent behind the gleaming tropical façade of the resort to the inclusion of Speedo boys alongside bikini girls in J.D. and Brax’s fantasy, since Brax is gay.

And on a craft level, the rub-two-nickels-together aesthetic of Blumhouse dovetails nicely with the re-creation of a 1970s Aaron Spelling series; cinematographer Toby Oliver (“Happy Death Day 2U”) has clearly studied up on the original “Fantasy Island,” with some shots that are no doubt direct shout-outs to the original show.

By the third act, however, the characters have gotten the memo that they’re in a dumb horror movie, which requires them to make absolutely boneheaded decisions as the movie hurtles toward a ridiculous conclusion and a why-you’re-all-here reveal that absolutely doesn’t land. The cast (including Michael Rooker as a mysterious, machete-wielding man living off the island’s grid) gets through as well as they can, although Peña’s dignity really has to kick into overdrive to get the actor through the ludicrous resolution.

That resolution, of course, leaves the door open to future sequels, or perhaps a new show that will offer a revolving cast of stars suffering, but ultimately learning, at the hands of Mr. Roarke. If future installments don’t improve drastically, audiences will be suffering right along with them.