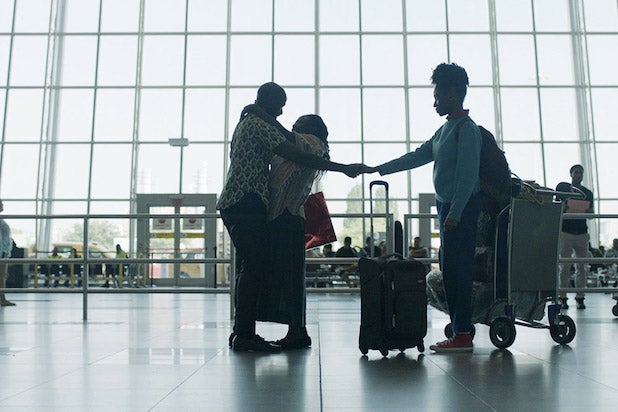 IFC Films has acquired the North American rights to “Farewell Amor,” the film from Ekwa Msangi that premiered in competition at this year’s Sundance and was awarded the Producer’s Award.

IFC is planning a release for “Farewell Amor” in December of this year.

“Farewell Amor” is the story of a man named Walter who reunites with his family after 17 years in exile in New York City from his home in Angola. The film begins as Walter is picking up his family from the airport and bringing them back to his one-bedroom apartment in Brooklyn. They quickly discover how the years of separation have turned them into absolute strangers. As they attempt to overcome the personal and political hurdles among them, they rely on the muscle memory of dance to find their way back “home.”

“Ekwa Msangi is an exciting new voice in independent cinema and we are honored to partner with her to introduce ‘Farewell Amor’ to North American audiences. We are thrilled to support Ekwa and welcome her into the IFC Films family,” Arianna Bocco EVP of acquisitions and productions at IFC Films said in a statement.

“We’re so delighted to have found a supportive and caring home for ‘Farewell Amor’ in IFC Films, and that Arianna and her team are as excited as we are to share this labor of love with the world. Not many are bold enough to distribute a story about an African family fighting for love, and the fact that IFC sees the human story in our film and are willing to champion it says a lot about them. If there were ever a time that our world needed a reminder of our humanity, it is now,” Msangi said in a statement.

The deal for the film was negotiated by IFC Films’ EVP of acquisitions and productions Arianna Bocco with Endeavor Content, Film Constellation, and Cassian Elwes on behalf of the filmmakers, as well as Anita Surendran, Granderson Des Rochers LLP handling legal.