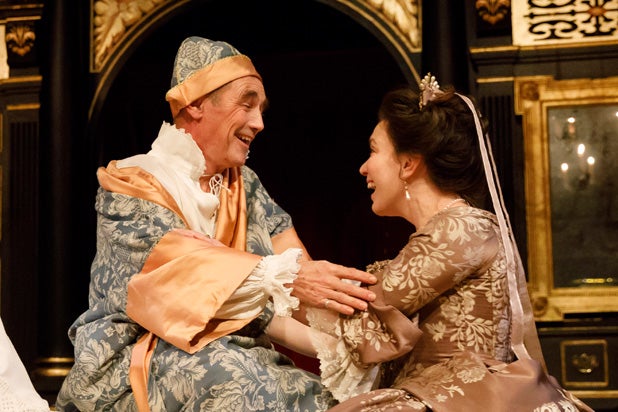 Who thought that George Frideric Handel would ever get a jukebox musical on Broadway? Nine arias from seven of the composer’s early 18-century operas are featured in Claire van Kampen’s new play, “Farinelli and the King,” which opened Sunday at the Belasco Theatre after a run in London. The countertenor Iestyn Davies sings at evening performances; James Hall does the matinees.

The wonderful thing about “Farinelli” is the chance to hear a great countertenor in a theater of 900 seats, rather than the much larger Carnegie Hall or the truly gargantuan Metropolitan Opera. The Belasco is much closer in size to the theaters Handel wrote for than where opera is usually performed in New York City. Davies’s tone, range and coloratura can be heard to their full dazzling effect.

He sings the role of the real-life castrato Farinelli (1705-1782), while Sam Crane acts and speaks it. When the two are on stage together, they’re dressed alike (designs by Lorraine Ebdon-Price). Crane doesn’t lip sync while Davies sings. Rather, he stands around looking terribly glum at being so magnificently upstaged.

Also Read: 'The Children' Broadway Review: How to Cope After a Nuclear Meltdown

Later in the play, van Kampen gives a reason for why Crane needs to look so discomforted in these moments. After his brother had him castrated, Farinelli (born Carlo Maria Michelangelo Nicola Broschi) never heard his singing voice as his own. It belonged to another person, a freak, perhaps.

The word “freak” isn’t used in “Farinelli and the King,” but it sums up the identification the castrato star and King Philippe V of Spain (Mark Rylance) have for one another. The king is also mad, and the only way he can stop hearing foreign voices is to have Farinelli’s beautiful singing voice replace them. The queen (Melody Grove) arranges for Farinelli to sing for her husband on a regular basis. It’s such a relief not to be married to a mad man 24/7, and of course she can’t help but falling in love with Farinelli. Or is it simply his singing she loves?

This story is the stuff of grand opera! Van Kampen’s disjointed storytelling and John Dove’s pedestrian direction, however, turn it into something nearer soap opera — but without either the intrigue or the sex of that lesser genre. We do learn that the castrati could have sex, not that Farinelli and the queen ever do.

Fortunately, Rylance puts his full arsenal of mannerisms on display to prevent this king from being the royal bore of Madrid. Whenever van Kampen’s dialogue turns florid, he gives it a flat modern reading, and throws in an F-bomb. Elsewhere, he vocally stumbles and pauses, and lets dull phrases wither in his mouth for added comic effect.

Meanwhile, Grove’s queen suffers without giving much range to her desperation other than an occasional eyeball roll or nostril flare. And Crane’s castrato remains glum, especially when Davies is singing.

Dove delivers an appropriately spectacular entrance for the singing Farinelli at the end of Act 1, but for the most part his direction of the two Farinellis is a major waste of potentially golden opportunities. When Farinelli sings an aria especially for the queen, Grove ignores Davies, who’s doing all the work, to focus her attention on Crane, who’s merely standing there. Since Farinelli’s inferiority complex derives from a disassociation of talent and person, shouldn’t the queen at that moment be focused on the singing Farinelli and not the other guy?