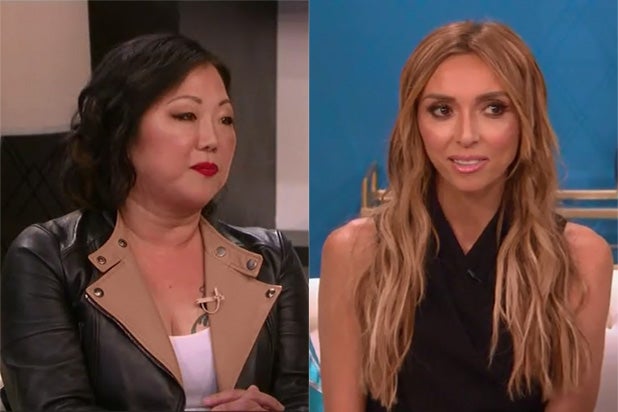 In the episode, the panel discussed the fashion worn by the nominees, performers and guests of the 2015 MTV Video Music Awards, including the many, many outfits of host Miley Cyrus.

When asked to choose her favorite look from the awards show, Cho selected Cyrus’ red carpet look featuring silver suspenders and blonde dreadlocks. “It looks like she got in a fight with duct tape and a chandelier. And the bitch won,” she said.

“That hair looks like it smells like weed and patchouli oil,” she continued, mocking Rancic’s comments from February that went viral when they were perceived to be racist.

Rancic had no response to the barb, simply hiding her face behind one of the set’s throw pillows while Rivers continued with the segment.

The show also introduced a new segments, including “Housewife or Drag Queen,” in which the hosts had to guess from which of the two groups a quote originated, and “What Would Joan Say?,” which had the hosts imagining how the late comedian would react to an outfit.

Monday’s episode was the first new installment of the show since E! pulled the show from its schedule back in March, after the dramatic departures of Kelly Osbourne and Kathy Griffin earlier in the year.