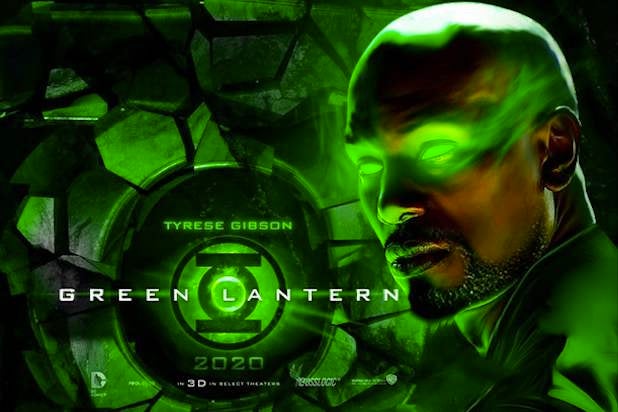 Did Warner Bros. find its new Green Lantern from the cast of “Fast & Furious” sequel “Furious 7”? No, but Tyrese Gibson is crossing his fingers that studio executives are following him on Instagram.

Since Jan. 23, the 36-year-old actor who plays Roman in the blockbuster Universal franchise has posted over a dozen images that depict him as the DC Comics superhero returning to the big screen in 2020.

See photos: 10 Superhero Sequels That Soared – or Sank – at the Box Office

“Rumor has it that,” Gibson wrote with the first image of him as the comic book character Ryan Reynolds played in 2011.

In another post accompanying an image of a masked vigilante named Mayhem — a comic book character modeled after Gibson for a series he launched in 2009 with co-writer William Le — Gibson discussed diversity in the superhero world.

“‘Why don’t we have more black superheroes’….: We have a few…. Now we have one more…. #MAYHEM,” Gibson wrote. “Potentially doing this #GreenLantern role isn’t an opportunity its more like a ‘responsibility’…. Prayers and love will get us there.”

Warner Bros. did not return TheWrap‘s request for comment, but Gibson’s choice of words suggests he’s in the running for the role.

The studio, however, has yet to even address the property outside of acknowledging plans for the character to join the DC movie universe Zack Snyder began building with “Man of Steel.” An individual with knowledge of the situation told TheWrap that it’s a bit too early to even begin discussing which actor will get the role.

Also Read: Superheroes Chris Pratt, Chris Evans Clash Over Super Bowl: ‘You Are Not My Friend, You Are My Enemy’

“FB Almost 10 million – the people are excited!! When you give the people what they want… They show up,” Gibson wrote with screenshot of Facebook views on one picture.

It’s pretty clear Gibson is taking a page from “Furious 7” co-star Vin Diesel‘s playbook. The actor famously hinted at a meeting with Marvel, which led his massive online following to speculate what he could have been discussing with the studio behind “The Avengers.”

Also Read: Comic Book Overload: Why TV Has Gone to the Superheroes

It turned out to be nothing, because Diesel made up the meeting, but for good reason: He wanted to get on Marvel’s radar. And he did, eventually joining the “Guardians of the Galaxy” cast as a walking, talking tree with a limited vocabulary.

Will the strategy pay off for Gibson? Only time will tell, but at least he’ll have lots of artwork to commemorate that time he tried really, really hard to get cast as Green Lantern.

DETERMINED!!!!!! 20|20 shout to @bosslogix “I am fully committed to suiting up for this adventure” – @Tyrese #GL “In brightest day, in blackest night, No evil shall escape my sight. Let those who worship evil’s might, Beware my power, Green Lantern’s light!!!

Rumor has it that.

Very talented people in the world… The fans are having too much fun with this….. #FanArt @comicsandcoffee thanks – #Inspired

Dope! @bosslogix strikes again…… Design something dope….. And I will repost… #Tag you in it…..