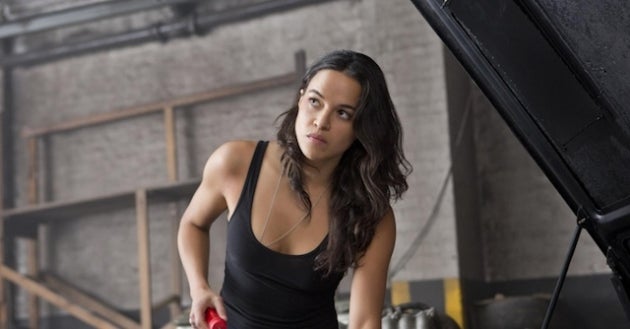 When Tyrese Gibson, Vin Diesel, Sung Kang and Michelle Rodriguez took the stage at the Colosseum at Caesar's Palace it was indeed a welcome break from the spectacle of white men anchoring big studio tentpole films.

This kind of diversity has powered the illegal street racing franchise to more than $1.5 billion at the worldwide box office. Moreover, the franchise has grown its audience with each installment: "Fast Five" was actually the series' highest-grossing film, racking up $626.1 million worldwide. That could be eclipsed by "Fast & Furious 6," which BoxOffice.com senior analyst Phil Contrino predicts will gross between $700 million to $750 million at the global box office this summer.

"They've called our series the most progressive force in Hollywood," Diesel told the crowd at CinemaCon.

Diesel was referring to the franchise's use of social-media, which he credited with reviving Rodriguez's character, who set out the previous installment, but was brought back at the request of fans. He might as well have been talking about its habit of casting lead actors that mirror the increasingly global nature of film audiences.

The kind of demographic variety makes sound business sense. Although Caucasians make up the majority of the population and moviegoers, Latinos are more likely than any other ethnic group to go to movies, according to a recent report by the Motion Picture Assn. of America. The number of Latinos who qualify as frequent moviegoers jumped from 8.4 million in 2011 to 10.9 million last year.

Rodriguez said people have also responded to her ass-kicking character so strongly because she is the rare female character on big screens who doesn't shy away from a fight. Women make up 52 percent of moviegoers, but most franchise films are made by men, starring men and geared toward men.

The bulk of the movies hitting theaters this summer will be anchored by white men — the major exceptions being Will Smith's "After Earth" and the Sandra Bullock and Melissa McCarthy female buddy cop movie "The Heat."

Given the success of "Fast & Furious," why hasn't the rest of the industry taken notice?