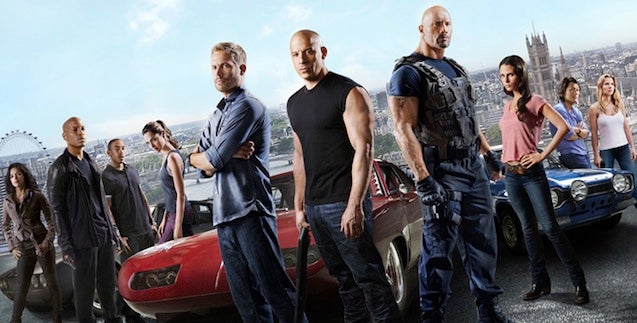 Neuropsychologists should consider studying “Fast & Furious 6” (and its equally thrilling predecessor, “Fast Five”) for its unique ability to completely bypass the brain’s logic center and go right to pushing our pleasure buttons over and over again. Countless action directors aspire to the big, dumb fun that these last few franchise entries have provided, but whereas most of them only get “dumb” and maybe “big” right, director Justin Lin and his crew deliver fun, fun, fun. (And nobody takes anybody’s T-Bird away.)

Thankfully, their bliss comes to an end when federal agent Luke Hobbs (Dwayne Johnson) shows up with an offer that Dom and Brian can’t refuse; Hobbs needs their help in taking down international no-goodnik Owen Shaw (Luke Evans), and the fact that one of Shaw’s henchmen appears to be Dom’s girlfriend Letty (Michelle Rodriguez) – thought to have been killed two movies ago in “Fast & Furious” – compels the hot-rodders out of retirement to rescue her.

Also read: 'Behind the Candelabra' Review: Sex, Lies & the Closet

Nabbing Shaw means putting the band back together, so Tej (Ludacris), Han (Sung Kang), Gisele (Gal Gadot) and Roman (Tyrese Gibson) are all called in from their respective exiles to pitch in. Shaw has his own Benetton-ad-ready group of multi-ethnic henchmen, while Hobbs has his own backup, the hard-kicking Riley (Gina Carano of “Haywire”).

There’s a lot of running around regarding the McGuffin device that Shaw wants to steal so he can do very bad things, but that’s not what “Fast & Furious 6” is really about; it’s really about driving really fast through Picadilly Circus and Trafalgar Square and zipping along Spanish expressways while being shot at by a tank. And Lin and his team do an extraordinary job of staging the ever-escalating action sequences, up to a jaw-on-the-floor finale involving various four-wheel vehicles in and around a cargo plane that’s trying to take off.

Not that all of the film’s thrills are tied in to combustible engines. Getting to see Carano and Rodriguez (two of the screen’s reigning bad-asses of any gender) go mano-a-mano twice counts as some kind of action movie landmark, and we also get Joe Taslim of the exhilarating “The Raid: Redemption” using his not-inconsiderable martial arts skills as one of Shaw’s men. (The non-action casting is fairly creative as well, with Thure Lindhart, an Independent Spirit Award nominee for last year’s powerful “Keep the Lights On,” popping up in a supporting role.)

When the craziness slows down and people actually talk, the theme of family is constantly underlined, to the extent that my seatmate suggested a drinking game for every time the word “family” is mentioned. Nonetheless, while Diesel and Walker have a fairly limited skill set as actors, they are put to good use here, and six movies in, they’ve definitely established themselves and their co-stars as a cohesive unit.

The crazy gender politics of the “Fast and Furious” movies remain on display, and not just through the macho posturing and the bikini-clad car models writhing in slow motion. Every joke, insult or threat in the movie seems to revolve around the feminization if not outright emasculation of men. It’s the sort of overcompensating we’ve come to expect from a series that critic Jennifer Smith once called “tender and homoerotic” and that spawned the “SNL” parody “The Fast and the Bi-Curious.”

“Fast & Furious 6” serves up a big plate of entertainment. Its makers never pretend it’s a steak, but they’re happy to offer up a big fat juicy hamburger with extra cheese.