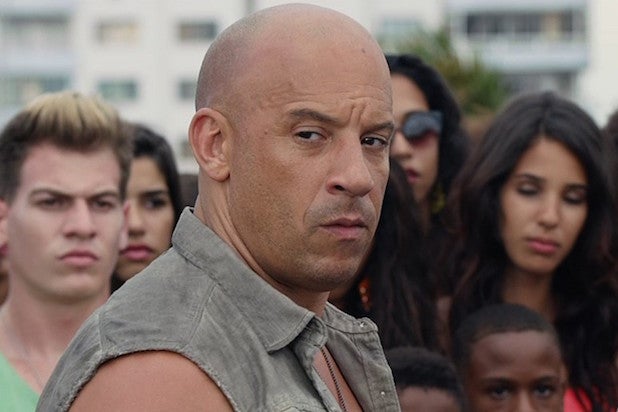 Universal’s “The Fate of the Furious” has set a new record for the highest worldwide opening weekend in box office history, racking up $532 million from 63 countries to pass the $528.9 million set two years ago by “Star Wars: The Force Awakens.” That total also exceeds the entire theatrical runs of the first five films in the high-octane car series.

Though the eighth “Fast & Furious” film failed to join “Furious 7” in the $100 million domestic opening club (it made $98.8 million this weekend), “Fate” had a roaring debut in China, setting a new 3-day record for Hollywood releases in the Middle Kingdom with $192 million. “Fate” also now holds the second-highest opening in Chinese box office history, trailing only local hit “The Mermaid,” which had the benefit of being released during the Chinese New Year and had four full days of previews. The big Chinese opening helped “Fate” blow past the $316 million overseas opening record set by “Jurassic World” by a massive margin, racking up $433 million.

Also Read: 'Fast and Furious' Works Because It Did the Marvel Cinematic Universe Before Marvel (Commentary)

With no major competition on the release slate, “Fate” swept the board and finished No. 1 in every territory it released in, also making more than $10 million in Mexico, U.K., Russia, Germany, Brazil, India, and South Korea. The film also made $22.6 million from 681 IMAX screens, trailing only the $23.2 million set by “Jurassic World” on the all-time IMAX international opening list.

“The Fate of the Furious” will release in Serbia & Montenegro on April 20; Poland on April 21; Romania on April 21 and Japan on April 28.

83 of the 'Fast and Furious' #Family's Cars through 'Fate' Ranked, Worst to Best (Photos)

Dom and co. have driven a lot of cars

So, over the course of eight movies, the "Fast and Furious" family has driven a whole lot of cars.  This list isn't quite exhaustive -- but it is 83 of the most prominent of the family cars we've seen them vroom vroom around in. Read on to live your life one quarter mile at a time.