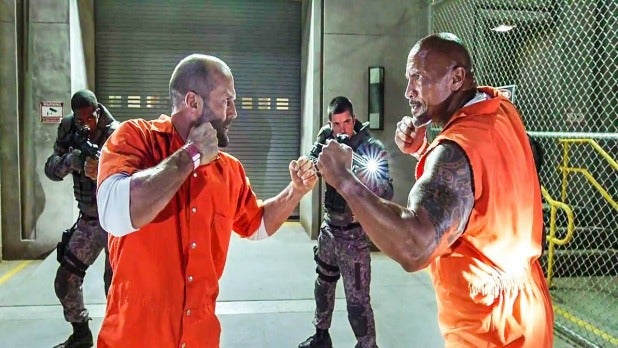 With “The Fate of the Furious” spinoff featuring Dwayne Johnson and Jason Statham now in the works, TheWrap has exclusively learned the details of the deleted scene which was supposed to kick off the movie.

TheWrap previously reported exclusively that a short “tag” featuring Johnson and Statham was filmed for “The Fate of the Furious,” but producer and co-star Vin Diesel killed plans to add the scene to the very end of the movie. One individual familiar with the situation told TheWrap that the scene was viewed as a launch point for a potential spinoff.

The deleted scene is a nod to “Rocky 3’s” fight at the end between Rocky and Apollo. Hobbs and Shaw face off and right before they connect fists they stop, look at one another and one of them goes, “Why are we fighting? We should be working together instead of for that idiot.”

And “that idiot” is none other than Dominic Toretto, played by Diesel. (If you don’t get the reference, that means you’re among the few who hasn’t yet seen the latest “Fast & Furious” installment, which is in theaters now.)

The spinoff, which will be written Chris Morgan, will feature Johnson’s Luke Hobbs and Statham’s Decker Shaw teaming up for their own side adventure ahead of the next installment in the “Fast” series of films.

Producer Neal Moritz had the tag filmed without Diesel’s knowledge, insiders told TheWrap. When executive producer Samantha Vincent, Diesel’s sister, learned of the scene and told Diesel, he became enraged, according to the insiders.

They said Diesel then called the film’s studio, NBC Universal, to explosively air his grievances. The studio had all the theatrical prints recalled and cut the scene, the insiders said.

Another insider put it more diplomatically, saying that the sequence was initially shot as bonus content for home entertainment release. When studio executives and filmmakers reviewed the sequence that included Johnson and Statham,  they “loved it,” but ultimately decided not to include it in the theatrical release because “the sequence would make for a better opportunity somewhere else,” the insider said.

The news of a potential spinoff comes as “Fate of the Furious” heads into its second weekend in theaters following a record-breaking debut. The movie had the biggest opening weekend in movie history, racking up $536 million worldwide with only $98.8 million coming from domestic screens.

Since releasing in 15 overseas markets on April 12, “Fate” has reached the $600 million global mark in just six days. That puts it on pace to pass “Beauty and the Beast” and set the new bar for the highest grossing film of 2017.