HBO Max has released the trailer for “FBoy Island,” a new reality dating series hosted by comedian and actress Nikki Glaser (“The Nikki Glaser Podcast,” “One Night with Nikki Glaser”).

The series will follow three women who move to a tropical island with 24 single men — 12 of whom are “nice guys” looking for love, and 12 who are self-proclaimed “FBoys,” looking for… not love. In fact, to throw in a twist, there’s money on the line and the “FBoys” have admitted to producers that they’re only there to compete for cash.

The women will navigate the dating pool together with the hope of finding a real love connection. By the finale, the “nice guys” and “FBoys” will be revealed and audiences will finally see who the women end up choosing. 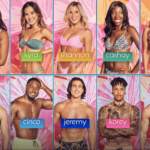 The trailer features everything one could want from a reality dating show: gorgeous people lounging on the beach, grown men pushing other grown men into pools, men feeding women grapes, couples going on dates, couples crying and much, much more.

“FBoy Island” is produced by STXalternative. The series concept was created by Elan Gale (“The Bachelor” franchise), who is executive producing for TheYearOfElan Productions alongside Jason Goldberg for STXalternative, Ben Bitonti, Nikki Glaser and showrunner Sam Dean (“12 Dates of Christmas,” “Love is Blind”).