As the “Walking Dead” TV universe has expanded over the years, there’s only been one group that’s appeared in the main series and both spinoffs: the Civic Republic, or CRM, which served as the main villains of the “World Beyond” spinoffs. But on “Fear the Walking Dead,” which is currently years earlier than either “World Beyond” or the main series, there’s just one CRM person we care about: Isabelle, played by Sydney Lemmon, who will finally return in season 7.

The news came out of the “Fear the Walking Dead” panel during Comic-Con@Home on Saturday afternoon, where we also learned that “FTWD” season 7 will premiere on AMC on October 17, with an early release on AMC+. Co-showrunner Andrew Chambliss broke the news, but didn’t say how much we can expect to see of Lemmon.

You can watch the full panel for yourself right here.

We technically just saw Isabelle in the season 6 finale when a CRM helicopter picked up several of our heroes just before the nuke went off. Or at least that’s what we’re assuming, since the chopper pilot had Al on the radio — we don’t actually know for sure, because the character was fully covered, never spoke, and wasn’t played by Lemmon. But for those worried that Isabelle might drop those folks off and fly away between seasons can now relax knowing that Isabelle will finally be back for real on “Fear the Walking Dead.” 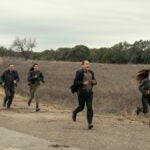 Also Read:
Is ‘Fear the Walking Dead’ About to Collide With ‘World Beyond’?

Isabelle first appeared during season 5. Her team was killed, and she had to work together with Al (Maggie Grace) to survive. They built up a romantic bond over the course of that episode before the two had to part ways, but Al has been pining for Isabelle ever since so we knew she’d have to pop up again eventually.

The season 6 finale of “Fear the Walking Dead” was pretty explosive — literally, since those pesky doomsday cultists did successfully manage to detonate a nuclear warhead. It’s not a good situation, obviously — some of the cultists are still around in their bunker where they’re keeping Alicia, and the others are scattered all over the place. Since the CRM has far better tech and equipment than anybody else we’ve seen on “FTWD” recently, Isabelle will likely need to help out plenty in season 7.