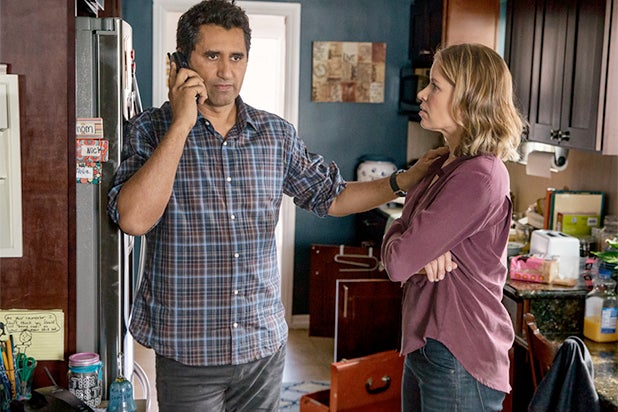 AMC’s “Fear the Walking Dead” is a prequel series to its megahit “The Walking Dead,” and being set in the same universe, the natural inclination has been for fans to clamor for some kind of crossover between the two shows.

However, the people in charge of the zombie drama are in no hurry to do that at this point.

“I think there is an instinct when you have two different storylines that are living in the same mythology, you want to see them conflate. I’d love to see them conflate,” showrunner Dave Erickson told TheWrap. “The first time I saw all the actors from both shows together at Comic-Con, hanging out … Yeah, it would be fun.”

However, “I just think there’s a lot of stories we can explore on our coast,” he explained. “They’re so deep into it. We have to play some catch-up because they’re six seasons in. I’m not looking at the first several seasons of the show, going ‘OK, where can we do a time jump so we can get close enough to them?'”

On top of the chronological and geographical differences, the difference in source material is also an obstacle to having crossovers. “The Walking Dead” originated in comic book form, created and written by the show’s executive producer Robert Kirkman, who is also an EP on “Fear.”

“There’s chronological issues, there’s geographical issues and also you’ve got a show that’s very much specific to the comics,” said Erickson. “I don’t think that Robert’s going to start writing our show into that, so no, there’s no plans.”

Erickson also ruled out seeing any earlier versions of “Walking Dead” characters showing up on the spinoff.

Another potential story ruled out by Erickson is the explanation of how this zombie apocalypse started in the first place.

“There were certain things I pitched to Robert in the very beginning,” Erickson said. “That was my initial thinking. OK, we need a big swing. We need something that’s radically different. I pitched a version of Patient Zero. And Robert said, ‘eh, that’s not really what this show is.”

Erickson now admits that Kirkman was right. “The thing that distinguishes the world, not just the original show, is that it’s never going to be about how did it start. People will wonder and there’s an instinct that everyone will want to know what the origin was … is there ever going to be a cure?

“I can’t speak for the comic and what he has planned for that side of things, but from my understanding, that has never been interesting to him. What’s interesting to him is the characters, how do you function when the social construct starts to disintegrate?” Erickson explained.