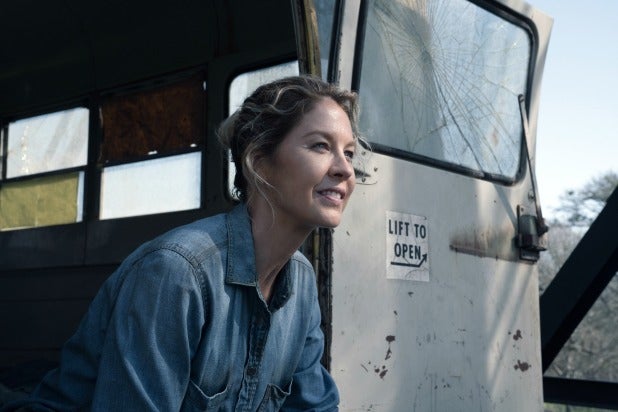 The second half of the fourth season of “Fear the Walking Dead” kicked off on Sunday after the show’s summer hiatus, and star Jenna Elfman spoke with TheWrap about how AMC’s spinoff of “The Walking Dead” will be taking a thematic approach that we haven’t seen much of on either show much: a glimmer of positivity.

“We’re going more toward that place of potential hope and potential optimism, and how you work backwards from there. We’ve had so much hostility and so much pain and loss.”

Also Read: You Can Watch Next Week's Episode of 'Fear the Walking Dead' Right Now

We discussed a big scene in next week’s episode — which AMC Premiere subscribers can watch now — that Elfman says kind of sums up how the rest of this season is going to go. Don’t worry, we won’t spoil it here for those who haven’t watched yet.

The next few episodes will show us what each of the cast members gets up to in the hurricane that hit at the end of Sunday’s episode, starting with Alicia (Alycia Debnam-Carey) and Charlie (Alexa Nisenson) this coming week. Alicia, of course, doesn’t like Charlie all that much because Charlie murdered her brother brother Nick in the first half of Season 4.

“There’s that moment where I think Alicia sees herself in Charlie. There’s that key, heightened moment, that I will not give away, but they’re in that basement and I think there’s that moment where Alicia is looking at Charlie and realizes Charlie’s pain as a child,” Elfman said. “And Alicia, as a child of Madison, and all the loss she’s been through, realizes that they actually have a lot of common. And there’s the defining moment for Alicia, of how is she going to treat this person who mirrors her.

“Everyone’s going to have some of those moments where we start seeing mirrored versions of ourselves in others and that becomes a little bit of a wake-up call, and we go one way or we go the other.”

Elfman said she was impressed by this direction that “Fear the Walking Dead” is going in Season 4.

“I’m quite moved by the second half of the season. I think it’s kind of potent. And I think it’s potent in terms of the whole ‘Walking Dead’ universe, where this fourth season will end up,” she said. “Can there be optimism in the apocalypse? Can that exist? And how could that possibly exist? What point of view opens the door to that. How to not live a hostile existence in an apocalyptic world? Can it be?

Elfman described this arc — which looks like it will largely involve the main cast facing off against the elements in a more basic survival scenario, rather than human foes in the more typical “the real monsters are people” stories typically told in “The Walking Dead” — as a sort of fundamental exploration of human nature.

Also Read: 'Fear the Walking Dead' Showrunner: Alicia Needs to Figure Out if 'She Can Fill Madison's Shoes'

“It explores, in my opinion, the makeup of who we are to each other as human beings,” Elfman said.
“I don’t know if you can go more basic in terms of human relations than this element that we start to explore and the door that that opens possibly, potentially, for us on this show.”

As for Elfman’s character specifically, June at the end of the mid-season premiere was trapped in Al’s SWAT vehicle as the hurricane really began to pick up, with June starting to panic a little bit because John Dorie (Garrett Dillahunt) is out there somewhere looking for Charlie. Elfman said that Al (Maggie Grace) and June’s big episode will come in the fourth episode of this half-season, which was directed by long-time “Fear” cast member Colman Domingo.

Elfman didn’t want to spoil what’s coming for June, but she did talk a bit about where her head is at as things start to go bad again after a period of relative peace where she settled in with Dorie and Charlie in a schoolbus.

“I don’t know if she trusts herself yet because she’s in a brief idyllic situation on the bridge with Dorie, but nothing like that lasts very long,” Elfman said. “When someone’s in a calm, safe environment they tend to return a little bit more with who they are. But faced with some stress, who do they become? Has she recovered enough to be who she truly is, who she was. Is that gone? Is it lost forever?”

As for what was probably the most talked about part of the mid-season premiere — when Morgan (Lennie James) declared his intent to return to Alexandria and invited everyone to go with him — Elfman noted that June has not yet expressed an opinion about that prospect and maybe doesn’t have a fully formed opinion on it yet because she’s still getting used to being comfortable in a group setting.

“I think she needs to understand the herself and the John Dorie of it all first,” Elfman said, pointing out that June doesn’t really have a handle on their relationship just yet. “I think that’s her first thing she’s gonna have to face.”