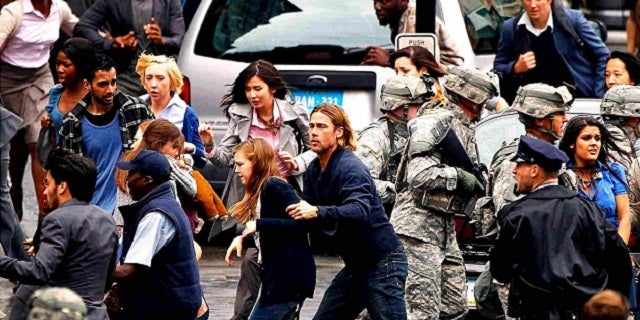 When executives at Paramount viewed the latest cut of the $175 million Brad Pitt zombie film "World War Z," they were not concerned by the violence or its reengineered ending. They were worried about a minor plot point that involved a sensitive topic: China.

In the offending scene, characters debate the geographic origin of an outbreak that caused a zombie apocalypse and point to China, a Paramount executive told TheWrap.

Normally the detail would not have merited discussion at the top echelons of the studio. But given the fast-rising prominence of the Chinese market, state censorship and the quotas for U.S. releases, the studio advised the movie producers to drop the reference to China and cite a different country as a possible source of the pandemic, an executive with knowledge of the film told TheWrap.

The change was made in recent days in the hopes of landing a deal for one of Paramount’s biggest summer movies to play in China, the world's fastest-growing film market.

"It’s not a huge plot point,” an individual with knowledge of the studio’s plans told TheWrap. “But it’s safe to say [they’re] going to want a release there.”

China passed Japan as the largest international source of box office revenue in 2012, contributing $2.7 billion, a 36 percent increase over the previous year. And some analysts say the Asian giant will pass the United States in standalone box office revenue by 2020.

Also Read: From 'Skyfall' to 'The Avengers,' How the Foreign Box Office Is Trouncing Domestic

While China has loosened its restrictions on the number of foreign films that can screen in the country, its film board continues to wield a great deal of influence, causing unprecedented changes in plots, release strategies, casting and other elements of Hollywood production. Marvel had initially planned “Iron Man 3” as a Chinese co-production, a tactic that has been taken with films like “Looper” and “The Karate Kid,” in part because co-productions are not subject to China’s quota for imported films. Chinese censors must still approve them.

In the case of “The Karate Kid,” censors objected to the Chinese villain, so Sony cut 12 minutes of the film to secure a release, which came later than initially planned.

“If you’re going to shoot a film that will be released in China, [scrutiny] is inevitable,” David Franzoni, the Oscar-winning producer and screenwriter, told TheWrap. Franzoni would know better than most since he wrote the script for a drama being produced by the Chinese government’s investment fund, the Xi’an Qujian Film & TV Investment Group.  Antoine Fuqua will direct the 8th century tale of a love affair between a Chinese general and one of the emperor’s concubines.

Franzoni said the Chinese film board approved his treatment but then found flaws in the script. He must now choose between fictionalizing the tale or changing his take on history enough to mollify the censors.

“Theoretically they can make you reshoot scenes,” Franzoni said, comparing the film board’s scrutiny to studio notes. “They have a lot of power so you want to try to be sure you have it all down the first time.”

While Franzoni tries to avoid running afoul of censors before production begins, in other cases studios don’t alter their movies until post-production. Chinese censors cut large chunks out of several movies released last year, including 40 minutes from “Cloud Atlas” and 12 minutes from “Men in Black 3,” excising all scenes in Chinatown. They also cut parts of the latest James Bond film, “Skyfall,” including a scene that featured the assassination of a nameless Chinese security guard.

The elimination of that sequence had little bearing on the final creative product, and keeping it in the film was not worth surrendering the Chinese market.

Similarly, the minor alteration to a $240 million dollar zombie film will go unnoticed by viewers, but it speaks to the substantial influence China is having on American cinema.

“The Chinese Communist Party wants to have a unified message,” Stanley Rosen, director of USC’s East Asian Studies Center who has also published articles and a book on film, told TheWrap. “They are getting better in terms of what subject matter is allowed to be shown, but worse in terms of remaining hyper-sensitive to anything that puts China in a bad light.”

In the case of “World War Z,” Paramount didn’t wait for Chinese censors to view the film. Before screening it for anyone in China and negotiating for distribution, the executives recommended the change.

“Just the fact that China somehow is the origin of a pandemic with the food safety problem and the SARS epidemic, that would never get approved in China,” Rosen added. “They are wise in taking that out.”

Rosen, who believes studios will soon have to make movies specifically for the Chinese marketplace, said he was surprised Paramount felt “World War Z” stood a chance of gaining distribution in China. The country has strict laws outlawing any movies that deal with magic, horror or superstition.

China only opened its market to the Hollywood studios in 1994, when its own film industry had reached its nadir. “It wasn’t out of admiration for Hollywood but to save the Chinese film industry,” Rosen said. “People weren’t going to the movies.”

At the time, China only permitted 10 foreign movies to screen, then increased it to 20 before the current total of 34. Those additional 14 slots are all reserved for IMAX or 3D films.

Most of the American movies that succeed in China are big-budget blockbusters like “Avatar” and “The Amazing Spider-Man,” where a creative decision is influenced as much by box office implications as any artistic ideal.

“If you’re making a film about a zombie apocalypse, you’re not going to worry about the integrity of the filmmaker,” Rosen said. “You’re trying to make money.”