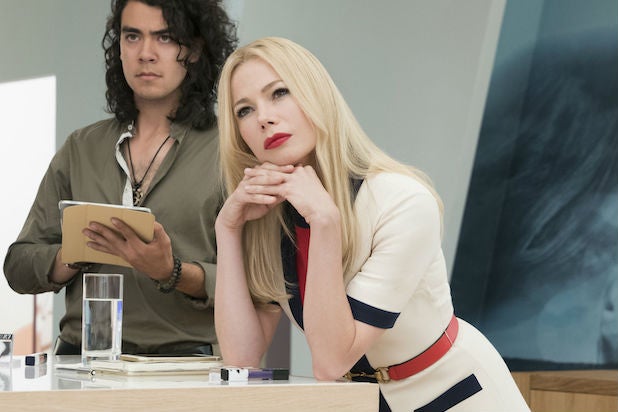 Michelle Williams is an unexpected scene-stealer in this weekend’s “I Feel Pretty,” but take a closer listen — the Oscar nominee’s vocal performance contributes to an ongoing conversation about gender and voice.

Williams plays cosmetics CEO Avery LeClair in the STX comedy, a model of feminine perfection styled within an inch of her life and suffocating under the pressure it brings. The character serves as an ideal for Amy Schumer’s self-loathing protagonist, but also a lightning rod thanks to her insanely high-pitched voice.

This tone infantilizes her character no matter how serious the conversation she’s conducting as a businesswoman.

“She is the object of ridicule because of her unfortunate voice,” Williams said during her press tour for “I Feel Pretty” this week.

Williams handles the affectation like a pro, playing up her own saccharine sounds for laughs, but Avery LeClair is the latest in a long line of “sexy baby” types that invite derision and spark debate.

“In the past seven years or so, there’s been so much attention paid to the female voice. From vocal fry to the baby voice. There has always been a cultural anxiousness about gender and voice,” Karen Tongson, an associate professor of gender studies at the University of Southern California, told TheWrap.

The most popular example of the sexy baby voice comes from a 2011 episode of “30 Rock” that centers entirely around the phenomenon. Cristin Milioti plays a guest writer on the fictional sketch series created by Tina Fey’s Liz Lemon — she is scantily clad, pridefully promiscuous and constantly coming on to men in the workplace. And, of course, her voice hits the highest registers possible.

In an NPR interview the same year, Fey recalled the real-life incident that inspired the episode. It was from a college acting class.

“This beautiful, voluptuous little tiny actress had one of these tiny voices. She was doing a monologue, and one of my acting teachers, he very gently said, ‘OK. I want you to do the monologue again, and I would like to use your adult woman voice,'” Fey told Fresh Air host Terry Gross.

The actress dropped her pitch and spoke in her true voice, Fey said, “and all the other women in the class looked at each other like, ‘I knew it!””

Tongson said the “30 Rock” episode “essentially presents those anxieties, particularly for feminist-identified and working professional women — that they are subjugating themselves to certain expectations around femininity and softness. If someone is speaking in a higher tone, it diminishes authority.”

Examples are everywhere. On the highly-bingeable Bravo series “Imposters,” Israeli actress Inbar Lavi offers a masterclass in voice work as she plays a con woman always assuming new identities. One of those is a ditzy, cleavage-baring assistant trying to romance her boss. In his presence, she speaks in the register of a toddler.

During Kristen Wiig’s time on “Saturday Night Live,” one of her most popular recurring characters was a vampy redhead named Shana. Her shtick was a combination of sexy baby voice and the transatlantic accents of Hollywood’s golden age, who used her exaggerated manners to command the attention of men in any given situation.

“Look earlier in culture at ‘My Fair Lady,'” Tongson said. “We’re talking about how accents mark class. It informs your identity in so many different ways. Whether its a type of accent, tone, the words you choose. It can really mark where you belong in a social order.”

This vocal scrutiny is not just limited to scripted content. Two months ago, Jimmy Kimmel devoted an entire segment on his late-night show to call out a contestant named Krystal on “The Bachelor.” He crowned her as having “the most annoying voice in ‘Bachelor’ history,” and played a supercut of her cooing exaggerated greetings.

Reality kingpin Kim Kardashian West’s tendency to drop from sky-high registers to a groggy low — known as “vocal fry” — is also the subject of internet mashups and hot takes.

Consequences get higher outside the safety of philosophical musings and observations in entertainment. Real women often change or mask their voices in everyday situations, sometimes to damaging effects, Tongson said.

“Women in professional situations speak much lower than their actual tambour. I worked with a speech therapist because I was having vocal module issues … I was speaking much lower in the classroom than what my natural vocal box was built for,” Tongson said.

“That has to do with associating with deeper voices and authority.  It’s a common problem. Speech therapists I’ve worked with said it’s a completely common issue for women and it can damage people’s voices and create physiological harm,” she concluded.

We pray no Michelle Williams’ were harmed during the making of “I Feel Pretty.”