While my biggest accomplishment during COVID involves changing out of my sweatpants and into jeans, Felicity Jones is out here making the rest of us look bad. If being an Oscar-nominated actress and mother weren’t already enough, the “On the Basis of Sex” star Felicity Jones has added executive producer to her overwhelming list of IMDb credits. Not only does Jones star in the new Netflix film “Last Letter from Your Lover,” but it is also the first title under her production company Piecrust.

Based on a romantic novel by JoJo Moyes, “Last Letter from Your Lover,” follows ‘Ellie’ (Jones), who finds a trove of love letters from the 1960s and sets out to solve the mystery of a secret love affair. On the other side of the dueling storyline is Jennifer, played by Shailene Woodley, who also served as an executive producer on the film.

While getting to work with Woodley was one of the things that drew Jones to the film, their characters’ separate storylines prevented them from having any scenes together. “We were like two ships passing in the night,” Jones said during a recent interview on the “UnWrapped” podcast, produced by WrapWomen. 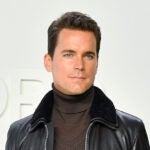 Luckily, as executive producers on the film, there was plenty of time for Jones and Woodley to collaborate behind the scenes. From script development and early discussion about characters to reviewing various cuts of the film, Jones said they “were able to have a voice every step of the way.”

According to Jones, stepping into this new role as a producer seemed like the perfect next step in her career. “You obviously have such an intimate knowledge of a character and the story when you’re playing someone in the film. It seemed a very natural progression to be able to have a voice in the broader structure of the story,” she told WrapWomen.

Looking forward, Jones says she is looking forward to doing more on-screen work with Woodley. But in the meantime, the actor will be heads down producing her new thriller film “Borderland.”