A record 18 percent of movies slated for release in 2019 from Hollywood’s six major studios have a female director, a substantial jump from just 3 percent in 2018, TheWrap has found.

Sixteen of the 87 studio films slated for release in 2019 have at least one woman credited as director — up from just three last year, when fully half of the majors (Paramount, Sony and Warner Bros.) had zero female directors on their wide-release slates.

Another sign of progress: For the first time in history, all six major studios have at least one film directed by a woman on their slates in 2019.

And perhaps as a reflection of public outcry about gender parity in Hollywood from organizations like Women in Film, the female-directed projects reflect a wide gamut of genres and budgets, from Anna Boden and Ryan Fleck’s big-budget superhero movie “Captain Marvel” for Disney to Greta Gerwig’s starry literary adaptation of “Little Women” for Sony to Gurinder Chadha’s Sundance darling “Blinded by the Light” for Warner Bros.’ New Line division. 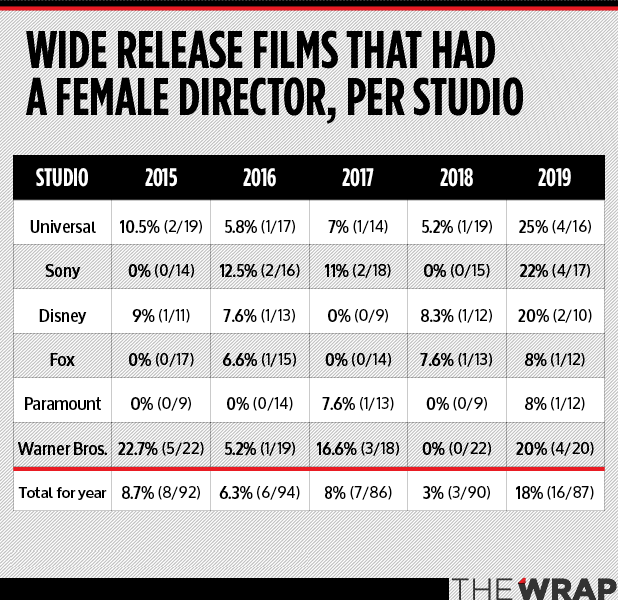 It’s a notable change from a 2018 where one would be hard pressed to find any film directed by a woman. Last month, studies conducted by USC and San Diego State found that just four of the top 100 highest-grossing films in 2018 and 15 percent of the top 500 were directed by women, both counts signifying a drop from the year before. But this year’s slate of studio releases may be a sign that diversity efforts in Hollywood are starting to bear fruit.

“It’s what we have known for a long time. Movies about and by women are showing they can be successful at the box office, and the industry is following,” Women in Film Executive Director Kirsten Schaffer told TheWrap. She notes that diversity initiatives like WiF’s Reframe program are finding success because they are challenging studios to look at every stage of how they make their movies.

“When people start the work of examining that unconscious bias, that’s when we see the systemic changes necessary. They start thinking about who makes the decisions, which directors and producers are the first considered for hiring. And it goes down from there for every aspect of a film’s production.”

Indeed, some studios are trying to send the message that they are asking such questions about themselves. Last week, Paramount CEO Jim Gianopulos announced in a company-wide memo that the studio would establish a “Content Creation Council” with the goal of making Paramount’s greenlight and development process more inclusive at all levels of production.

“Special attention will be paid to our storylines, our talent in front of and behind the camera, our vendors and our shooting locations,” Gianopulos wrote.

Reps for all six studios declined to comment for this story, though all confirmed their current release slates.

For this survey, TheWrap did not consider releases from art-house divisions like Fox Searchlight and Sony Pictures Classics, which often rely on acquisitions as opposed to developing projects in-house and hiring the filmmakers involved.

Here is the 2019 outlook at each studio, as well as major projects slated for 2020 or currently in development. 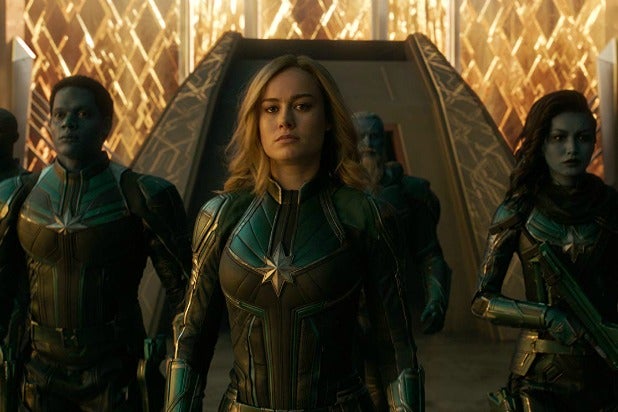 As usual, the current box office kings have the smallest number of 2019 releases, with just 10 films (at least until the studio completes its expected acquisition of Fox’s film and TV assets). Of those 10, two with $100 million-plus budgets have women sharing a director credit. First is next month’s “Captain Marvel” (pictured above), which Anna Boden directed with “Mississippi Grind” partner Ryan Fleck, making her the first woman to direct a Marvel Studios release.

Disney has announced several female-directed films beyond this year, including Niki Caro’s live-action remake of “Mulan,” set for 2020.

Pixar’s Domee Shi, who won the Best Animated Short Oscar on Sunday for “Bao,” is in the early stages of developing her feature debut. Meanwhile, at Marvel Studios, Australian director Cate Shortland is reportedly attached to direct “Black Widow” while “The Rider” director Chloe Zhao is attached to direct “The Eternals,” though neither project has been officially announced by Disney, who declined to comment for this story.

See the full Disney 2019 slate below: 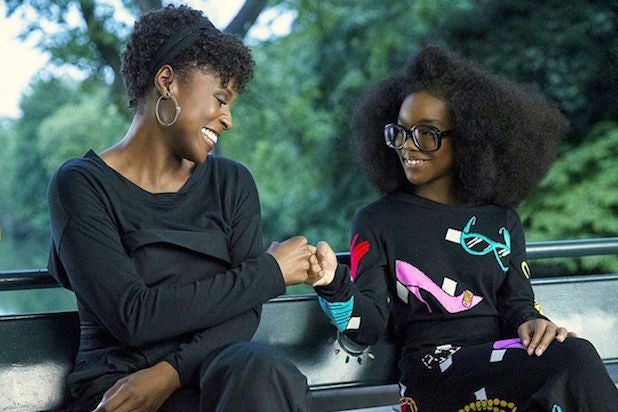 Four of the 16 films on Universal’s slate — not counting two still-unspecified placeholders — are directed by women. First up is Tina Gordon Chism’s April comedy “Little,” (above) starring “black-ish” standout Marsai Martin alongside Regina Hall and Issa Rae, followed a month later by Gail Mancuso’s “A Dog’s Journey,” the sequel to the 2017 family film “A Dog’s Purpose.”

Later in the year, the studio will release DreamWorks Animation’s “Abominable,” which is co-directed by Jill Culton, who became the first woman to direct a CGI animated feature with “Open Season” in 2006. And on Thanksgiving, Melina Matsoukas’ thriller “Queen & Slim” will be released, starring Jodie Turner-Smith and Daniel Kaluuya in the titular roles.

One title that was removed from the 2019 slate was “Cowboy Ninja Viking,” which was supposed to be the feature directorial debut of Emmy winner Michelle MacLaren. A Universal spokesman tells TheWrap that the film is still in development. Meanwhile Universal’s 2020 slate includes the Jordan Peele-produced remake of “Candyman,” which Nia DaCosta will direct.

Also Read: Why Hilary Swank Is So Optimistic About Filmmaking's Diverse Future (Video)

Universal’s indie wing, Focus Features, has three films directed by women coming this year: Laure de Clermont-Tonnerr’s “The Mustang,” due March 15, Kasi Lemmons’ Harriet Tubman biopic “Harriet” and Emerald Fennell’s adaptation of the thriller novel “Promising Young Women.” The latter two films do not have a specific date but are set to release by year’s end.

Here is the full slate: 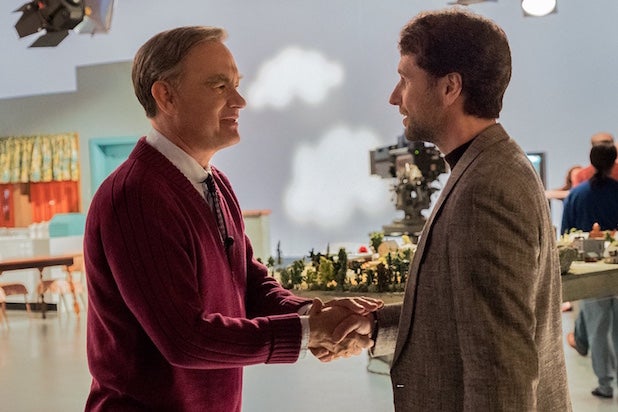 Sony has already released the first of its four female-directed titles this year, Catherine Hardwicke’s remake of “Miss Bala.” The film has flopped at the box office, grossing $14.7 million after a month in theaters against a $15 million budget.

Later this year, three films directed by women will be a part of Sony’s holiday slate, starting on November 1 with Elizabeth Banks’ revival of “Charlie’s Angels.”

Then, two potential awards contenders will be released on Thanksgiving and Christmas: “A Beautiful Day in the Neighborhood,” starring Tom Hanks as Mister Rogers and directed by “Can You Ever Forgive Me?” filmmaker Marielle Heller (pictured above), and Oscar nominee Greta Gerwig’s directorial follow-up to “Lady Bird,” an adaptation of “Little Women” starring Saoirse Ronan, Emma Watson and Meryl Streep.

Beyond 2019, Sony has at least two more films by women in development: Clea DuVall’s “Happiest Season” and Paloma Baeza’s “Toymakers Secret.” The studio also has acquired overseas distribution rights for seven films by women through its Stage 6 Films label, including global rights for Heidi Ewing’s “Arrivals” and Camille Stochitch’s “Adventures of Dally and Spanky.”

A Sony spokesperson noted that in a recent study conducted by the USC Annenberg Inclusion Initiative, the studio had more films with women and/or people of color in lead roles than any other studio in 2018. 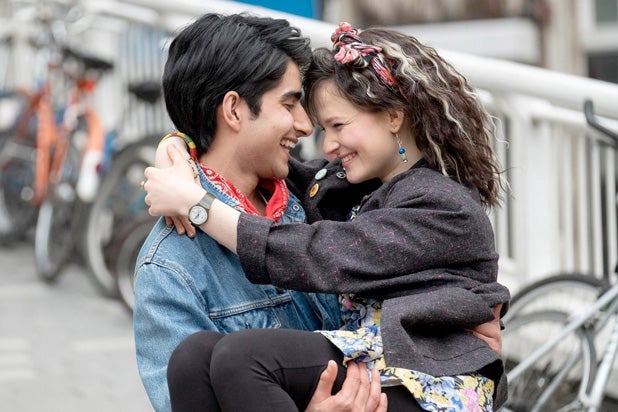 Like Sony, Warner Bros. has a larger slate than most of the rest of Hollywood thanks to the presence of New Line and Village Roadshow and partnerships with companies like Legendary Pictures. Warner has four films from women this year — even after Patty Jenkins’ “Wonder Woman 1984” was bumped from November 2019 to June 2020.

The first of WB’s female-led slate is Katt Shea’s adaptation of the classic YA novel “Nancy Drew and the Hidden Staircase,” due March 15. May will bring another YA adaptation with Ry Russo-Young’s “The Sun Is Also a Star.” August will see the release of Gurinder Chadha’s New Line-produced drama “Blinded by the Light” (above); and in September, Warner will release “The Kitchen,” Andrea Berloff’s tale of a group of widows who take over their husbands’ criminal empire after their death. 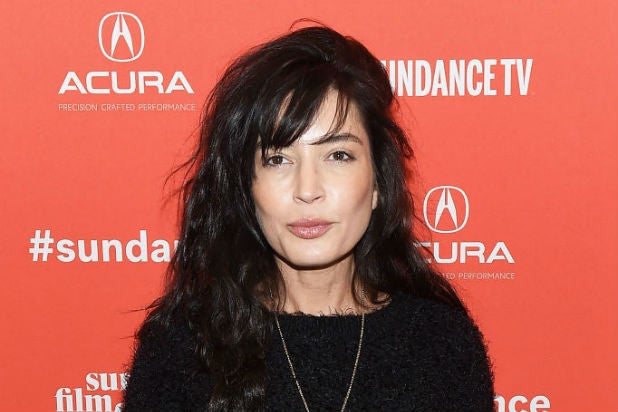 Of the 12 films on Paramount’s slate, only one is directed by a woman: Reed Morano’s “The Rhythm Section,” which had its release date pushed to November 2019 after lead star Blake Lively suffered an on-set injury.

While no films by female directors are currently slated after “The Rhythm Section,” a studio rep said that six woman-led films are in active development — including Ry Russo-Young’s “Nightlife” and Lisa Cholodenko’s remake of the Oscar-nominated German film “Toni Erdmann.”

Here is Paramount’s slate this year: 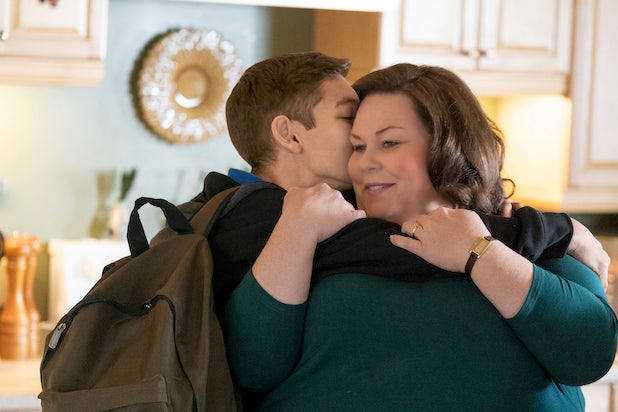 Finally, there’s Fox, whose 2019 slate is complicated by its impending acquisition by Disney. It’s difficult to say how many of Fox’s films and developing projects will see release after the merge is finalized later this year. But for now, Fox does have one film with a female director on this year’s slate: Roxann Dawson’s faith-based film “Breakthrough,” which is set for release in April (pictured above).

Fox’s indie wing, Fox Searchlight, only has two films currently slated for 2019, neither directed by women. This month, however, the studio acquired rights to “Nomadland,” Chloe Zhao’s follow-up to “The Rider” and starring Frances McDormand in her first leading role after winning an Oscar for “Three Billboards Outside Ebbing, Missouri.”

Fox’s current slate is as follows: