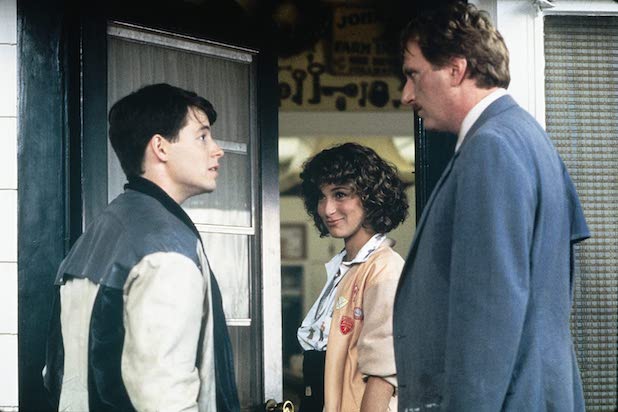 Jennifer Grey, one of the stars of the 1986 John Hughes classic “Ferris Bueller’s Day Off,” on Saturday shared some behind the scenes, throwback photos from the set of the film that should give you a good wave of nostalgia.

The photos come ahead of Grey and the full cast of “Ferris Bueller’s Day Off” reuniting for Josh Gad’s quarantine YouTube series “Reunited Apart” on Sunday, which will reunite Grey with Matthew Broderick, Alan Ruck and Mia Sara to discuss the film.

The photos include a candid close-up of Ruck putting on his red hockey jersey that his character Cameron wears in the film, another of Grey posing with Richard Edson, who plays the garage attendant who goes on a joyride in Cameron’s 1961 Ferrari 250GT California, and a third of Hughes chatting with the cast in a down moment on set.

There’s even a shot of Grey about to make out with Sara, who plays Ferris’ girlfriend Sloane in the film.

“Life moves pretty fast. If you don’t stop and look around once in a while, you could miss it,” Grey said in her post, quoting Ferris’ eternal words of wisdom at the film’s start.

Gad earlier this week released a trailer for what will be the final episode of “Reunited Apart,” which so far has reunited the casts of “The Goonies,” “Ghostbusters,” “Lord of the Rings,” “Splash” and “Back to the Future.” Each episode is meant to raise money for a different charity. No charity has been announced yet for this week’s episode.

You can see Grey and the rest of the cast of “Ferris Bueller’s Day Off” in “Reunited Apart” on Sunday at 12 p.m. ET/9 a.m. PT. Check out Grey’s post below: