Producer Dana Brunetti has won an appeal with the Producers Guild of America to have their mark of p.g.a. added to his credit in the upcoming film “Fifty Shades Darker,” he announced Sunday on Instagram.

“The PGA has reversed it’s [sic] decision for my mark,” he announced. “I’ve won the battle, but not the war.”

Although Brunetti received the mark for 2015’s “Fifty Shades of Grey,” only fellow series producers Michael De Luca and author E. L. James were approved for the mark on the sequel, which is scheduled to hit theaters on Feb. 10. 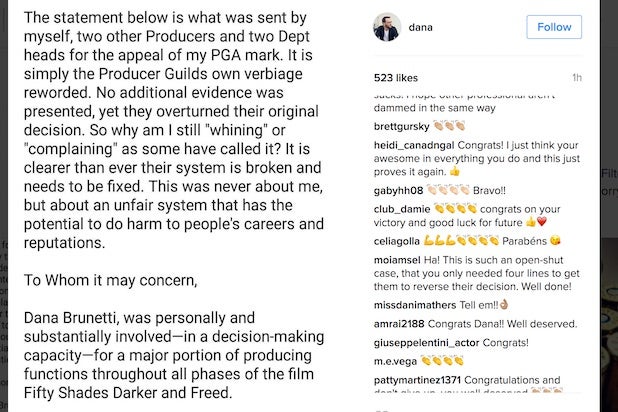 The Panel has determined, based upon the additional evidence obtained, that Dana Brunetti and Marcus Viscidi each performed a major portion of the producing functions on this film in a decision-making capacity, as is required for eligibility pursuant to Section B of the Rules,” the Guild said in a Nov. 18 statement.

On Oct. 19, Brunetti took to social media to state his case against the Guild, saying: “Once again outdated Hollywood reigns. According to my own ‘guild,’ I’ve been determined not eligible to receive the PGA mark on #fiftyshadesdarker.”

Many fellow producers stood in support of Brunetti, promising “to rally against the Producers ‘Guild’ with a vengeance.”

According to the PGA, the mark “signifies having met the Guild’s standard of having undertaken a major portion of the producing duties on a motion picture.” It was created to determine who contributed work on set or, instead, in a “decision-making” capacity.

As the PGA puts it, “The Producers Guild believes that audiences deserve to know which producers, among an often-extensive list of credited individuals, actually did the work.”