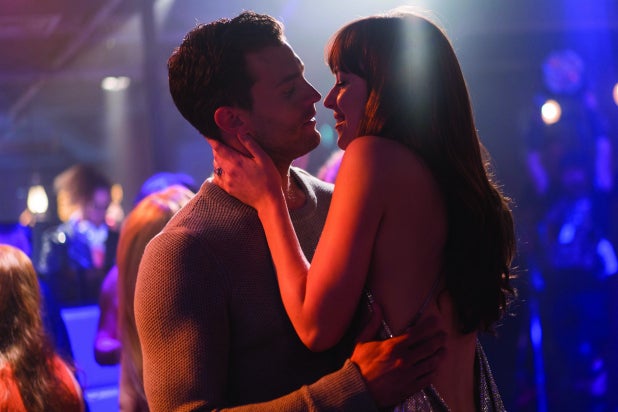 “I feel like I’ve been here before,” says Anastasia Steele, now Grey (Dakota Johnson), wandering through the forest to an old abandoned mansion. So do we, Ana. The phenomenon that started out as “Twilight” fan fiction, then turned into runaway bestselling novels that stirred the loins of nice middle-class ladies around the world, the “Fifty Shades” franchise concludes with “Fifty Shades Freed,” which provides mainly a sense of relief, rather than the orgasmic climax promised on the posters. But then again, that’s exactly what it was supposed to do.

While the first film in the series did most of the legwork in wrestling the source material into something that would sit right with a wider, more woke, audience, the last in the series seems to focus entirely on keeping the fans satisfied. And at this point, they’re basically the only ones likely to still be around.

After a white wedding and whirlwind honeymoon in Paris and the French Riviera, Christian Grey (Jamie Dornan) and Anastasia are drawn back to Seattle by the specter of Ana’s former boss, the leering Jack Hyde (Eric Johnson, “The Knick”), who has undergone a transformation from shamed book editor to criminal mastermind bent on destroying their world. It’s a good thing too, because now that the Greys have put a ring on it, there isn’t much more for the couple to do other than negotiate exactly which sex toys they’ll be trying next. (Blown-glass butt plugs, anyone?)

There are still traces of the klutzy, credulous Ana that we’ve come to know (gazing at handcuffs in wonderment as if she’s never seen them before in her life), but the newly minted Mrs. Grey spends more time in the driver’s seat on this film, at one point literally weaving Christian’s muscle car through traffic in a high-speed pursuit. She kicks asses and takes names, and she’s generally on top of the situation, in more ways than one. Oh, and she can do a mean parallel park too.

For his part, Christian — the man who can make women’s lady bits tingle just by touching their faces — is, despite all his macho bluster, a changed man: married, domesticated, even (how funny!) attempting to cook.

“Fifty Shades Freed” is being sold as the sexiest, most explosive of the series (“Don’t miss the climax,” pleads the tagline), but for the third time the film fails to capitalize on what made the books such runaway successes in the first place: the sex. At this point we’ve been in and out of the red room so often that it’s completely lost its intrigue (Ana even manages to catch 40 winks in there), and the sex scenes feel more like an afterthought, inserted to remind us of the reason the series became such a phenomenon.

For a film that’s supposedly all about sex-for-pleasure, a surprisingly large amount of the story goes to the practical result of heterosexual coupling. While fighting about children, Johnson and Foley deliver the most convincing scene of the entire film: Ana, with damp hair fresh from the shower, angrily gets dressed for work, jerking on suspender stockings and absently adjusting her boobs as she and Christian fire shots at one another.

It feels unintentional, but it’s a nice realistic (and completely unsexy) touch in a film that trades entirely on fantasy and wish fulfillment. But even though the sex scenes may not raise more than eyebrows, director James Foley does get it right in a few critical scenes, including Ana’s first and only use of her safe word, during which the previously lethargic camera suddenly jumps to life.

But although it tries to hide it by cramming in fist fights, car chases and kidnapping, “Fifty Shades Freed” suffers from a lack of rhythm, moving from plot point to plot point with as much spontaneity as meal-planning for one’s luxury penthouse household with one’s housekeeper. It’s clichéd, stodgy and overly faithful to the original books. But at the end of the day, who cares?