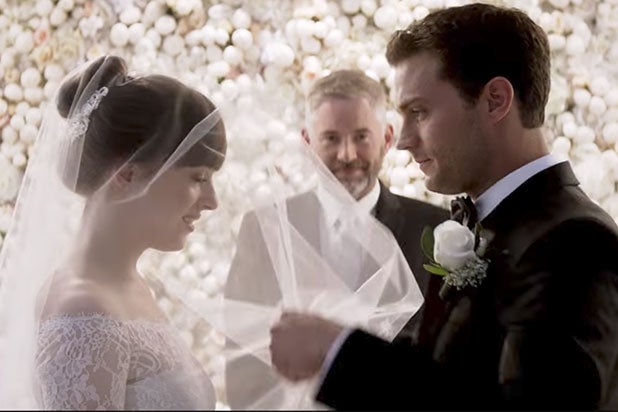 Trackers have the film scoring an opening in the upper $30 million range from 3,700 locations, with Universal expecting a start in the lower 30s against a reported $55 million production budget. “Grey” got a boost by having Valentine’s Day coincide with its opening weekend, while “Darker” and “Freed” have Valentine’s Day falling on a weekday.

Also Read: 'Fifty Shades Freed' Is Like a 'Bad Tinder Date That Lasted Three Years' and 6 Other Shady Reviews

“Fifty Shades Freed” follows Anastasia Steele and Christian Grey after their wedding as they deal with both married life and enemies from their past that have returned to haunt them. Dakota Johnson and Jamie Dornan star, with James Foley directing from an adapted screenplay written by Niall Leonard.

Expected to come in second this weekend is Sony’s family film “Peter Rabbit,” based on the children’s tales by Beatrix Potter. Directed by Will Gluck (“Annie”) and starring James Corden voicing the lead role, the film is expected to gross $18-20 million this weekend, with Sony projecting a $16 million weekend.

Finally, there’s director Clint Eastwood’s true-story thriller “The 15:17 to Paris,” based on the story of how three Americans, Spencer Stone, Anthony Sadler and Alek Skarlatos, stopped a terrorist attack on a train bound for Paris in 2015. Warner Bros. and Village Roadshow are releasing the film in 3,047 locations, with trackers expecting a $12 million opening.

The book was adapted for the screen by Dorothy Blyskal, with Sadler, Stone, and Skarlatos playing themselves. Judy Greer and Jenna Fischer also star.