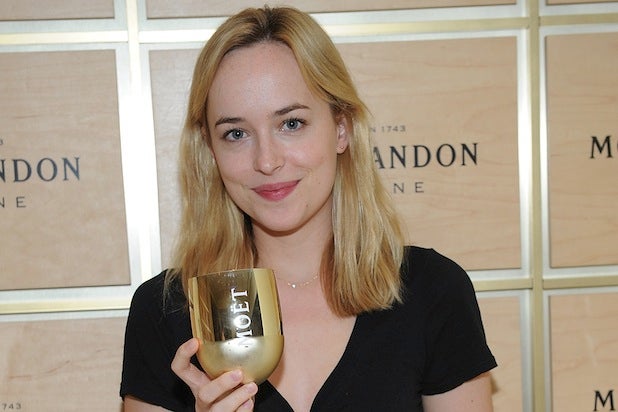 Despite the sands shifting around her, Dakota Johnson is 100 percent committed to “Fifty Shades of Grey” — and the filmmakers are equally firm on keeping their Anastasia Steele.

Though popular lore had it that intense chemistry with Charlie Hunnam won Johnson the part, the filmmakers are moving ahead with the “Ben and Kate” actress, a person familiar with the situation told TheWrap.

Hunnam abruptly quit the project over the weekend, citing his TV schedule, though multiple sources have told TheWrap that Hunnam underestimated the attention he would receive from the media and rabid “Shades” fans.

Anxiety and pressure are to be expected with a movie of this magnitude. But unlike Hunnam, Johnson knows what it’s like to live under a microscope, having grown up in the public eye as the daughter of Melanie Griffith and Don Johnson.

Now, whoever replaces Hunnam will be required to have chemistry with her, rather than the other way around. Multiple sources stress that the filmmakers will build the rest of the cast around her rather than let the new Christian Grey dictate the ensemble, which is expected to include Jennifer Ehle (“Zero Dark Thirty”) as Anastasia’s mother.

As they go back to the drawing board to re-cast Christian Grey, the producers have hired Oscar-nominated screenwriter Patrick Marber to polish Kelly Marcel’s screenplay, an individual familiar with the project told TheWrap.

It remains unclear whether Hunnam had already notified Universal of his intention to leave “Fifty Shades” by the time the studio hired Marber to polish the script, or whether his hiring was a last-ditch attempt to keep Hunnam on board.

Marber’s hiring may also be a sign that the filmmakers knew they had to revamp the script a bit to make the project more actor-friendly. The “Fifty Shades” brand is the real star of the movie, so it’s success isn’t likely to be cast-dependent. While an established actor would certainly be preferred, it’s entirely possible that an unknown could be cast. After all, it’d be hard for the book’s vocal fan base to criticize an actor with a limited body of work.

Several actors, including “Arrow” star Stephen Amell, have balked at playing Christian Grey because there’s not much to the character as written in the book.

“I didn’t find [Christian’s] character to be totally redeeming,” Amell told Access Hollywood at the Monte-Carlo TV Festival earlier this year. “I actually didn’t find him to be that interesting … Nothing about Christian Grey really spoke to me.”

“Fifty Shades of Grey” remains on track — for now — to start production in November in advance of its Aug. 1, 2014 release date. Should production push to early 2014, the movie could be ready in time for the holidays, which may even help it fare better at the box office, as it currently opens the same day as Marvel’s “Guardians of the Galaxy.”

WME-repped Marber has experience dealing with sordid material, having adapted his own play “Closer” into the 2004 Mike Nichols-directed feature that starred Julia Roberts, Clive Owen, Jude Law and Natalie Portman. He also received an Oscar nomination for writing Richard Eyre’s 2006 thriller “Notes on a Scandal,” which also dealt with taboo sex.

The Hollywood Reporter broke the news of Marber’s hiring.