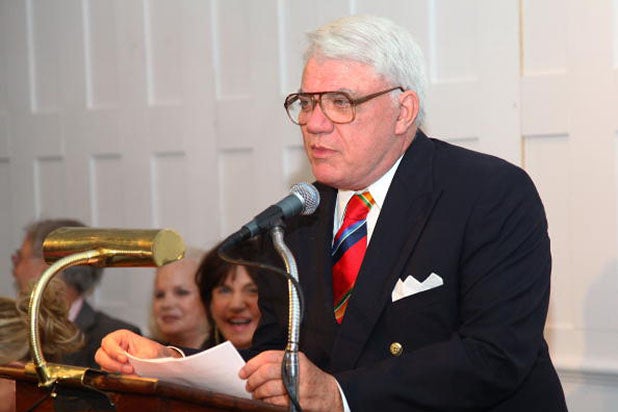 The New York Observer has laid off its chief film critic Rex Reed after more than 25 years at the paper.

Reed was laid off alongside several other entertainment staff members, according to Indiewire. The latest round of layoffs come as the paper attempts to cut back on expenses. “The shocking truth is that the Observer has been going down the drain financially for quite some time,” Reed said in a statement.

Reed blamed the downfall of the paper on its 2006 sale to Jared Kushner, who recently divested himself of the Observer when his father-in-law Donald Trump won the election and gave Kushner an advisory role in the White House.

“It’s a sad state of affairs, but I am open to any suggestions,” Reed said. “Although I have been informed it is nothing personal, simply a matter of financial desperation, I can’t help but feel like I have been treated with the same kind of incompetent confusion with which Jared Kushner and Donald Trump run everything else in the country these days.”

A brash critic whose career began as an entertainment journalist in the 1960s, Reed was known for stirring up controversy with his writing. In 2013, Reed was slammed for a review of the Melissa McCarthy film “Identity Thief” in which he called the actress “tractor-sized” and a “female hippo.”

He later defended the comments in a radio interview, telling his critics — including “Bridesmaids” director Paul Feig, who invited Reed to “go f— himself” on Twitter — that McCarthy was the real problem. “Don’t make me the villain,” he said.

“I object to using health issues like obesity as comedy talking points. That’s what this girl does,” Reed said of McCarthy. “I have too many friends that have died of obesity-related illnesses, heart problems and diabetes. … I have helped people try to lose weight, and I don’t find this to be the subject of a lot of humor.”

25 Worst Reviewed Superhero Movies of All Time, From 'Catwoman' to 'Green Lantern' (Photos)

“Wonder Woman” is one of the best reviewed superhero movies ever, but see which ones were duds

The superhero genre has come a long way. "Wonder Woman" has claimed the title of one of the best reviewed superhero films ever. But critics haven't always been kind to caped crusaders. Based on their Rotten Tomatoes score, these are the worst superhero movies according to critics.