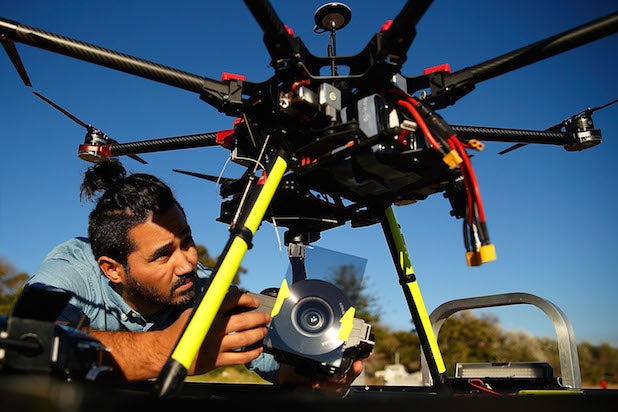 It is up, up and away for filmmakers’ drones.  The government told moviemakers on Thursday that the use of drones for film, TV and TV commercial production is officially allowed in the U.S.

“I have determined that using unmanned aircraft for this purpose does not pose a risk to national airspace users,” said Foxx, calling the decision a milestone in the government’s allowing the use of drones for commercial purposes.

Six companies that wanted to use the drones for movie, television and advertising production-Astraeus Aerial, Aerial Mob, Snaproll Media, Vortex Aerial, Pictorvision and HeliVideo Productions-will immediately get the right to use drones for films, TV and commercials on closed sets. Huerta said a request from a seventh company Flying-Cam is under final review.  Other production companies will have to apply for their own approvals.

Also read: Hollywood to the FAA: Let Us Use Drones! (Exclusive)

The FAA acted after Congress directed the agency to look more closely at allowing the drones use for commercial purposes.

While hobbyists, police departments and government agencies have been able to use drone aircraft for personal filming, the FAA had banned any use of drone aircraft for commercial purposes.  The ban was widely flouted by an array of commercial interests that range from real estate agents to producers. The FAA has rarely taken action to enforce the ban.

Thursday’s move by the FAA makes the use of drones by any of the six companies for film production purposes legal even as the agency retains a ban on the use of drones for most commercial purposes. The FAA’s move puts the U.S. film industry on a par with filmmakers overseas and the agency was urged to act by MPAA.

Dodd at the press conference said the result could be more moviemaking in the U.S.

“This is a big deal for us. The ability to uses unmanned aircraft systems are a great victory for audiences who demand and appreciate creative products,” he said.

“This is going to help bolster an industry that is critical one for our country,” he said. “Around the world today you can use unmanned aircraft in other countries. Now we are going to be able to do this at home. It is going to make a terrific difference.”

Huerta said that the FAA will now review petitions for other types of commercial use of drones.