Monday update:
For the second weekend in a row, the winner of the domestic box office was determined by Monday actuals, with Lionsgate’s "Kick-Ass" narrowly beating DreamWorks Animation’s four-week-old 3D holdover "How to Train Your 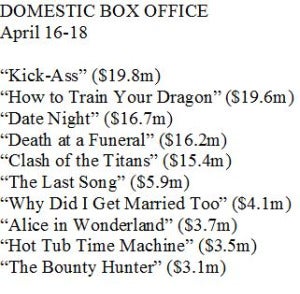 Dragon" by a margin of $19.8 million to $19.6 million.
Based on preliminary data on Sunday morning, "Dragon" was declared the early winner with $20 million vs. $19.8 million for "Kick-Ass."
Last week, Warner’s "Clash of the Titans" won a similar Monday morning reversal, winning over the newly released "Date Night."
Sunday update:
For the second consectutive weekend, the domestic box office winner will be determined by photo finish on Monday morning.
DreamWorks’ four-week-old 3D holdover “How to Train Your Dragon” narrowly edged out Lionsgate’s much-anticipated comic-adapted violence extravaganza “Kick-Ass” by a margin of $20 million vs. $19.8 million, according to preliminary studio estimates.
(Read also: ‘Titans’ Hangs on Atop Foreign Box Office)
With $158.6 million in North American ticket sales so far, “Dragon” declined only 19 percent from its third weekend in release, and is now less than $5 million off the pace set last year by DreamWorks hit “Monsters vs. Aliens,” which grossed $163.1 million after four weekends.
Produced for $165 million, "Dragon" has grossed more than $320 million worldwide so far.
For its part, the R-rated “Kick-Ass” came in with plenty of buzz and controversy, not to mention pre-release tracking projections of around $25 million.
However, even though its first-week total came in at under $20 million, according to preliminary estimates, Lionsgate still stands to make a healthy profit on the picture, having paid a sum in the mid-teens to acquire it.
“This is film is going to play,” said studio distribution head David Spitz, noting the minimal week-to-week declines “Kick-Ass” has endured abroad for foreign distributor Universal.
In its third weekend of international release, the movie dropped only 25 percent to $2.6 million, playing at 675 foreign theaters.
Also opening wide this weekend Sony/Screen Gems’ “Death at a Funeral” finished tied for third place, grossing $17 million.
With screenwriter Dean Craig adapting his own eponymous 2007 U.K. hit, and starring Chris Rock, Tracy Morgan, Martin Lawrence and Zoe Saldana, “Funeral” was acquired by Sony for $21 million.
In third place in its second weekend in theaters, Fox’s “Date Night” finished with $17 million, dropping only 33 percent from its premiere.
A week ago, “Date Night” was given the domestic box office crown based on Sunday estimates, but had to give it up on Monday morning when final box-office tabulations showed that Warner’s “Clash of the Titans” had actually grossed about $1.4 million more in ticket receipts.
As for “Titans,” industry pundits, including DreamWorks Animation chief Jeffrey Katzenberg, have publicly denigrated the film’s converted 3D, and have openly speculated moviegoers will revolt against the 3D format itself — and its associated premium ticket prices — based on their negative experience with the film.
But so far, after three weeks in theaters, there has been no backlash, with “Titans” dropping only 40 percent to $15.8 million.
The movie, shot and converted to 3D for around $125 million, has grossed $133 million in the U.S. and Canada to date, according to studio estimates.
In fifth place, Disney’s Nicholas Sparks-written “The Last Song,” which stars Miley Cyrus, passed the $50 million mark domestically, with the $20 million film dropping 41 percent to $5.8 million this weekend.
In sixth place, Lionsgate’s Tyler Perry film “Why Did I Get Married Too” declined 62 percent to $4.2 million, with the movie — also shot for around $20 million — now up to $54.9 million in domestic gross.
In eighth place, Disney’s 3D-converted Tim Burton adaptation “Alice in Wonderland” added an estimated $3.5 million to its seven-week total, bringing the film’s North American gross to $324 million.
Over the weekend, “Alice” also enjoyed Japan’s biggest opening of the year, grossing $6.4 million in that territory.
Globally, “Alice” has surpassed $825 million, making it the 22nd highest grossing movie worldwide ever.
Still, the weekend’s big story remained “Kick-Ass,” which was independently financed by filmmaker Matthew Vaughn at a cost of $28 million.
Showing clips of the movie at Comic Con last summer, Vaughn stirred up rampant fanboy anticipation — and a bidding war among studios. The film is a fast-paced, way-violent adaptation of Mark Millar’s eponymous comic-book series.
After winning out and acquiring domestic distribution rights, word-of-mouth screenings went really well for Lionsgate.
And despite potentially explosive plot elements — such as Chloe Moretz playing a 10-year-old F-word-spewing assassin — controversy didn’t emerge until the last minute, when film critic Roger Ebert called out the film for its excessive violence.
Comparable models weren’t easy to come by, but studio hopes were that “Kick-Ass’” opening would fall somewhere between what Sony enjoyed last year for similarly uniq, and similarly R-rated efforts “Zombieland” (premiered to $24.7 million) and “District 9” $37.4 million).
In the end, however, while still profitable, the film fell short of those benchmarks.
x
Looks like you're enjoying reading