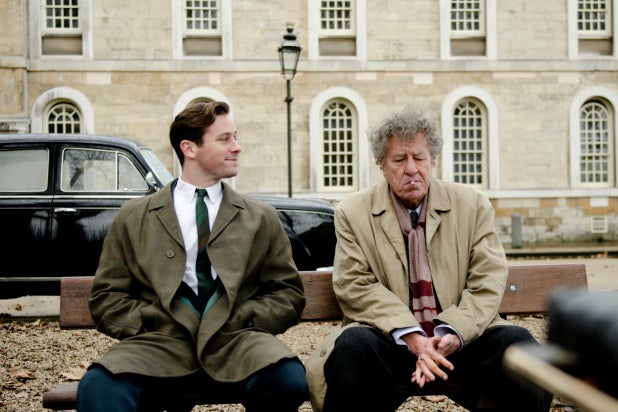 Stanley Tucci has spent the majority of his directing career telling stories about eccentric artists, but it wasn’t until “Final Portrait” that he seemed to find them annoying.

The struggling chefs of “Big Night,” the struggling actors of “The Imposters” and the struggling author of “Joe Gould’s Secret” could be forgiven their obsessions and flaws because they have nothing else to show for their lifetimes of work. If they behaved the exact same way after they were critically acclaimed and financially successful, they would be completely insufferable, just like this film’s version of Alberto Giacometti.

“Final Portrait” stars Geoffrey Rush as Giacometti, a Swiss painter and sculptor who makes so much money he literally doesn’t know what to do with it. So he hides it in wads around his damp, grey studio like he’s the child as well as the bunny in a never-ending Easter egg hunt. He spends most of his days neglecting his wife Annette (Sylvie Testud, “La Vie en Rose”), lavishing affection on his favorite prostitute Caroline (Clémence Poésy, “Harry Potter and the Deathly Hallows”) and being routinely dissatisfied with everything he paints and sculpts.

The year is 1964, the place is Paris, and at the start of the film Giacometti has invited a young art critic and author named James Lord (played by Armie Hammer) to pose for a portrait. Flattered, Lord accepts the offer and walks down to Giacometti’s alleyway apartment which, despite the artist’s enormous success, is so worn down it always looks like it’s in the process of being erased. Lord sits down, Giacometti does very little, and then they break for the day. Would he mind coming back tomorrow? And the day after that? A week at most …

Lord winds up going back to Giacometti’s studio for weeks. Giacometti paints him, erases everything, starts again, shirks work to blow off steam, and generally just wastes this young man’s time. The artist is hypnotically fascinating until he’s a total pain in the rear end, but Lord feels beholden to his sacred artistic process. After all, who is Lord to rush the great Giacometti? Work can wait. Relationships can wait. Life can wait. Forever, if necessary. There’s always more excuses to make in the name of greatness.

The premise of “Final Portrait” is farcical, but writer-director Tucci doesn’t seem to find it very funny. Time drags on, and Lord’s personal and work life fades away, yet the pace never ramps up; the consequences never seem totally dire, and the constant disruptions have no whimsy. Lord can leave any time he wants to — he’s only a prisoner of his own hero worship. Lord thinks great artists need to be indulged, and “Final Portrait” seems to argue that he’s a well-intentioned moron for thinking that.

As Giacometti, Geoffrey Rush gets to wallow in sad-sack self-importance. He rails on and on about how judgmental Pablo Picasso is, never once seeing the irony that he’s being spectacularly judgmental about him. He spends what seems like half the movie staring at a canvas, then barely grazing it with a paintbrush, and then screaming in frustration that he’s ruined everything and needs a break. He argues with his wife, he mopes when his mistress is unavailable, and he only gets away with it because his paintings and sculptures are good, and besides, sometimes he’s … kinda friendly.

Rush is talented enough to make Giacometti intriguing for a couple of scenes, but over the course of the movie Tucci practically dares us not to turn on him. By the time Giacometti reveals, offhanded, like it wasn’t anything, that he used to fantasize about raping and murdering women just before bedtime in order to help him sleep, it’s pretty clear we’re supposed to have lost all sympathy. He’s an a-hole who happens to have talent, and no portrait is worth spending this much time in the same room as someone like that.

Though finely acted, “Final Portrait” is a frustrating contradiction. Like James Lord, we are invited into the world of a great artist, but once we get there we’re forced to wonder whether it was worth the trip. Lots of biopics reveal their subjects to be flawed, miserable, or even despicable human beings, but they don’t always reserve a healthy portion of judgment for the rest of us, who just wanted to know what it was like to hang out with them. It’s a clever subversion of the whole biopic genre; it just never really sells its point in an impactful way.

Stanley Tucci takes our collective urge to excuse bad behavior in the name of art, a topic we desperately need to consider right now, but he doesn’t really put it under a microscope to see why that happens or how that relationship works. His characters are subtle, but his tone is muddled, as though it would be rude to come out and damn any of them. Without a strong guiding hand we’re left with a finely acted, but only adequate biopic, which brushes against greatness and then paints over it.