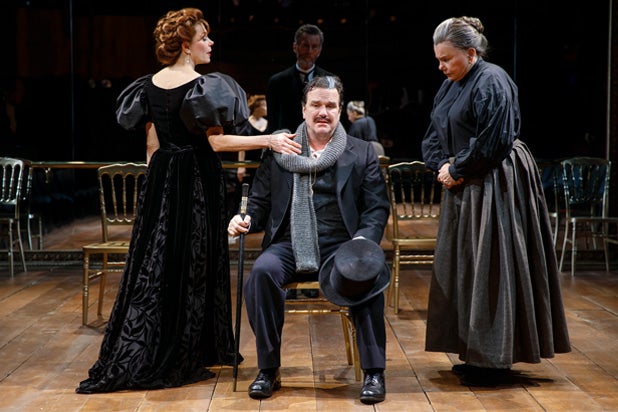 At his very best, Terrance McNally is able to express on stage the wonderfully uplifting, transportational power of the theater and how it affects the artist (Maria Calas in “Master Class”), as well as the audience (an opera queen in “The Lisbon Traviata”).

In McNally’s new play, “Fire and Air,” which opened Thursday at Off Broadway’s Classic Stage Company, Sergei Diaghilev is often both the artist and the audience.

At the 1912 world premiere of dancer-choreographer Vaslav Nijinsky’s ballet, “Afternoon of a Faun,” Diaghilev is a spectator but his artistic contributions to the work make him as much a co-artist as Nijinsky and composer Claude Debussy. The ballet impresario who founded the Ballet Russes finds himself carried into a state of ecstasy as he watches the “Faun” premiere only to come crashing down to the floorboards when Nijinsky (James Cusati-Moyer), even more ecstatic, takes the ballet into a sphere outside the master’s fantasy.

Much to everyone’s shock, the dancer-choreographer brings an unexpected autoerotic flair to “Faun,” hence la scandale. It’s an extended moment that’s beautifully performed by Hodge and Cusati-Moyer under the direction of John Doyle.

The “Faun” episode takes place early in “Fire and Air” and fuels the play almost to the end of the first act, when the Ballets Russes makes its ill-fated trip (for Diaghilev) to South America, where Nijinsky marries Romola de Pulszky, much to the fury of Diaghilev, who immediately experiences a very 21st-century moment of sexual misconduct and fires the dancer.

Much of this drama takes place during the intermission. But rest assured, McNally has his characters tell us all about it. Except for the re-creation of the “Faun” debut, McNally uses Nijinsky and other historic figures to reflect on the many crises of Diaghilev’s career as the actors sit on gilded chairs borrowed from some high-end banquet at Cipriani.

Also Read: 'He Brought Her Heart Back in a Box' Theater Review: Adrienne Kennedy Looks Back in Anger 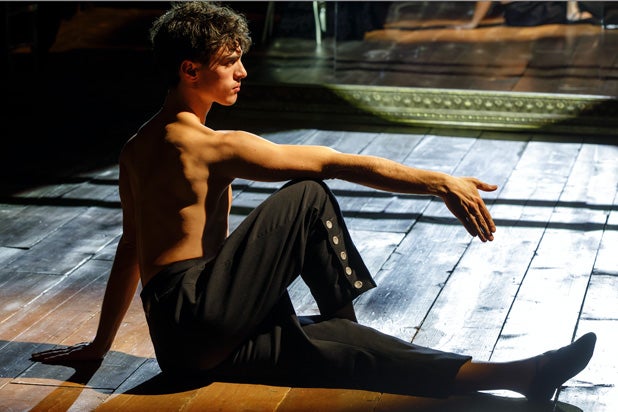 Instead of working against the grain of the play, Doyle is very presentational in his approach to “Fire and Air.” Nijinsky doesn’t go mad. He talks about going mad. Diaghilev doesn’t revolutionize ballet. He talks about it. Has any character, historic or not, ever been so aware of his exalted place in history even before he lived it? McNally’s Nijinsky and Diaghilev are so conscious of their every intention and motive that their on-stage action is smothered in talk and utterly lacks subtext.

Hodge plays Diaghilev with great verve, but after a while the character’s verbal dissertations on the transience of ballet, love, art, money and his lover-muse Nijinsky are enough to add the word “psychiatrist” to this legend’s many credits.

Cusati-Moyer’s performance proves less wearing. He successfully introduces a Nijinsky who’s more faun than man and maintains that delicately animalistic persona throughout. Then again, Cusati-Moyer has the advantage of having much less dialogue than Hodge, plus he’s wearing tights (Doyle’s costume faithfully re-create the originals worn by Nijinsky) or he’s half-naked or he’s completely naked except for a strategically placed towel.

McNally touts Diaghilev’s genius by reducing most of the characters around him to sounding boards for his intellectual rants. Lynn Redgrave’s housekeeper from the film “Gods and Monsters” is recycled as the maid Dunya (Marsha Mason). But the real dramatic disappointment arrives in the playwright’s take on such historic figures as the patron and pianist Misia Sert (Marin Mazzie), the editor-writer and political activist Dmitry Filosofov (John Glover) and the ballet legend Leonide Massine (Jay Armstrong Johnson).

Rather than being a powerhouse chorus, these characters serve only to ground Diaghilev or grind down his eccentricities. Filosofov wants Diaghilev to return to the safe romantic space of their college days. Sert kids Diaghilev about his sexuality as if he were the gay best friend next door. And Massine, the father of the symphonic ballet, is reduced to a second-rate dancer who’s forced to endure a class in basic ballet technique from the bovine impresario.

A talented cast brings more hot air than fire to this group of giants turned ciphers. It’s no surprise. McNally is the book writer who reimagined the Romanoffs as a loving, put-upon family in the current Broadway musical “Anastasia.”