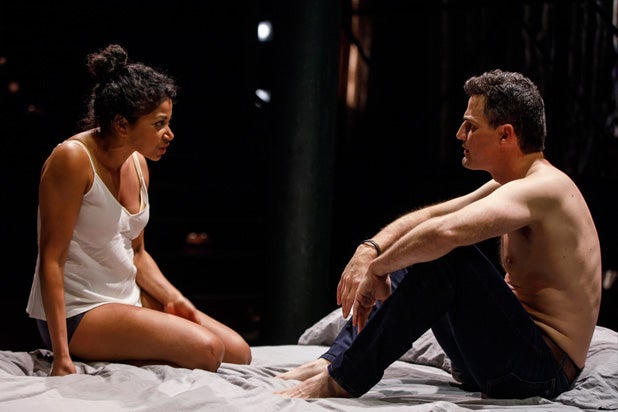 Kate and Jaap meet cute in Rinne Groff’s new play, “Fire in Dreamland,” which opened Monday at the Public Theater. It happens on Coney Island on a cold day in March. She has dreams of documenting a famous fire in 1911 that nearly destroyed the amusement park. He has dreams of being a filmmaker. They’re not as old as the characters in Terrence McNally’s two-hander “Frankie and Johnny in the Clair de Lune,” but they’re not kids either, and so there’s an urgency to their dreams: They had better materialize fast before Kate and Jaap acquire the loser status of, say, Frankie and Johnny.

This set-up proves interesting only when Jaap Hooft (Enver Gjokaj) begins to show sinister colors. Kate (Rebecca Naomi Jones), because she’s in love with the Dutch filmmaker, never notices the danger signs. In addition to her blinding love, she’s obsessed with her Coney Island history lesson, and begins to imagine herself the courageous mermaid who saved some animals during that historic fire. Kate is not so wacky that she thinks she is a mermaid. She imagines herself in one of those floor-length, low-cut and sequin-laden costumes that people in Brooklyn wear in the annual Mermaid Day Parade.

Perhaps Kate imagines herself as a mermaid rather than a seller of popcorn because the costumes are so much more theatrical. Marissa Wolf’s direction is very flashy and relies heavily on dazzling work from scenic and costume designer Susan Hilferty, whose set goes from icescape to inferno under the expert lighting of Amith Chandrashaker.

Kate’s fantasy life, unfortunately, is a lot less absorbing than the occasional glimpses Groff gives us of Jaap’s real self. “Fire in Dreamland” is told from Kate’s viewpoint, which, despite Jones’ best efforts to keep the character bubbly and upbeat despite a few crying jags, is that of a deluded run-of-the-mill optimist with whimsy spread on top with a shovel. Jaap isn’t as crazy as the title character in David Cale’s “Harry Clarke,” but his life story is worthy of a play. Kate, at best, is one scene in Jaap’s multi-act drama.

In Wolf’s production at the Public, “Fire in Dreamland” is an oddly reactionary work. The only admirable thing one could say about Jaap is that he’s dogged in the pursuit of his dream. Also, Gjokaj’s performance turns him into a very sexy guy. Otherwise, he’s a despicable immigrant, who, if he were a person of color, would fit Jeff Sessions’ concept of a foreign usurper. Groff’s script suggests that “Kate and Jaap may be played by actors of any racial background.” But how might we see Jaap’s situation if he were Filipino or Bolivian?

Late in this 90-minute play, we meet one of Jaap’s previous victims, Lance (Kyle Beltran presenting, a gross caricature of a total dunce). Nothing in the text suggests Lance’s ethnicity, but the character’s bio in the script identifies him as “African American.” Not seen but much discussed is the girlfriend who replaces Kate. She is named Teresa. Is she a Latina? Groff gives us the full name Jaap Hooft, but the others are just Kate, Lance, and Teresa. So what is Groff telling us? In this staging at the Public, Jaap appears to be targeting people of color.

Groff’s handling of abortion is more definitive. When is the last time someone wrote a play or a screenplay in which the leading female character goes through with her initial declaration to have an abortion? As Groff sees it, Kate’s future child is just another example of the character’s boundless optimism and courage in the face of being penniless.

Are writers afraid that we’d lose all sympathy for a woman if she did terminate her pregnancy?