The big difference is that “Suite” is much more contemporary and female; in fact, every character on stage is a woman, and every one of them (except for a maid played by Isabel Santiago) is the wife or daughter of a U.S. president.

There’s drama in the White House, and LaChiusa offers four very different scenarios that bring together the distaff side of the Nixons, the Carters, the Fords, the Reagans, and the Bushes. Having so many stories to tell, LaChiusa proves himself masterful as a book writer and lyricist. He gets right to the heart of the drama in record time.

In the musical’s first story, “Happy Pat,” Pat Nixon (Barbara Walsh) does battle with an overbearing mother-in-law (Theresa McCarthy) and a daughter getting married (Betsy Morgan as Tricia), while the president’s favorite daughter (Caissie Levy as Julie) spills the beans about an impending national scandal. It’s a great curtain raiser.

Most wickedly drawn is “Patti by the Pool,” in which a drugged-up Patti Davis (Caissie Levy) and a conniving Nancy Reagan (Alison Fraser) enjoy the hospitality of their rich friend Betsy Bloomingdale.

And most poignant is “In the Deep Bosom of the Ocean Buried.” Here, Barbara Bush (Mary Testa) honors the memory of a dead daughter (Theresa McCarthy) as she dismisses her son in the White House, much to the distress of the current First Lady, Laura Bush (Rachel Bay Jones). 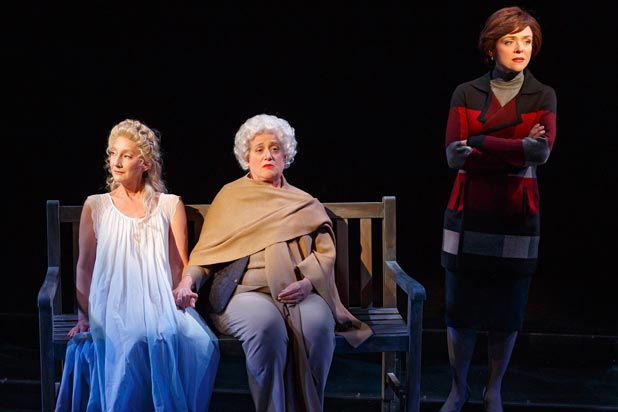 Only the second story, “Amy Carter‘s Fabulous Dream Adventure,” misfires. It’s also the only one that’s presented as a fantasy: Little Amy (Carly Tamer) dreams that her predecessor-idol Susan Ford (Betsy Morgan) will help her free the hostages in Iran, with little or no help from their respective mothers, Rosalynn (Rachel Bay Jones) and Betty (Alison Fraser).

In other words, liberals will enjoy this show more than conservatives. For everyone in between, “Suite” offers real drama played out against a backdrop of grand opera.

In addition to being a great storyteller, LaChiusa knows how to pick his orchestrators, Michael Starobin and Bruce Coughlin. You may find yourself listening to the orchestra when you should be following the vocal line. Melody isn’t always of prime concern, especially for composers of the 20th century.

The problem here is that LaChiusa seems to be trying to write melodies, but even when he produces bubblegum music for the Amy Carter character, the tune falls flat. His vocal lines often features octave jumps that aren’t so much dramatic as they are awkward, more discomforting than dissonant — especially for the performers.

“Patti by the Pool” contains the most spoken dialogue, the least music, which is definitely for the better.

The fine ensemble of actors is directed with finesse by Kirsten Sanderson.