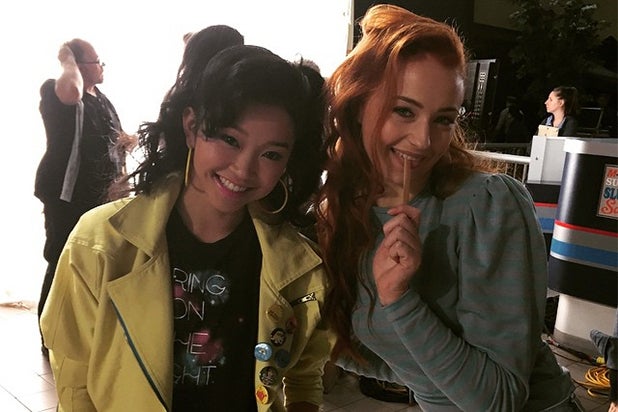 “X-Men: Apocalypse” is going to the 1980s, and that’s never been more evident than in the newest photo released from the set, featuring Sophie Turner and Lana Condor in some very distinctive and time-specific fashion.

Director Bryan Singer took to Instagram to share the photo, featuring Turner as telepathic/telekinetic Marvel Comics mutant Jean Grey and Condor as Jubilee, who can generate colored bursts of energy from her fingertips.

Social media has been a huge component of Singer’s early promotion of the film. He’s used Twitter to make major cast announcements, including both Turner and Condor, as well as Tye Sheridan as Cyclops, the return of Lucas Till as Havok and more.

He also shared the first look at Kodi Smit-McPhee as Nightcrawler before deleting the photo, in a clever homage to the way the blue mutant “BAMFs” away via teleportation.

“X-Men: Apocalypse” stars Michael Fassbender, Jennifer Lawrence, James McAvoy and Nicholas Hoult and will be released on May 27, 2016.

See the first photo of Turner and Condor, featuring big hair and bigger shoulder pads, below.