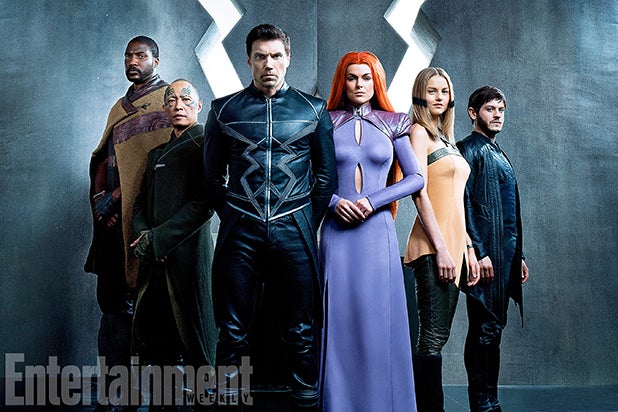 Entertainment Weekly released a first look at “Marvel’s Inhumans,” the studio’s latest foray into television, and it’s not going over so well.

The interview with showrunner Scott Buck doesn’t reveal much more than what we already knew about the show, but it does provide the first official picture of the group known as the Inhuman Royal Family, which will star in ABC’s eight-episode show.

The main criticism of the photo on the internet, which you can check out above, seems to focus on the costumes, which look cheap. Some people compared them to things you’d find in a Halloween store or a Hot Topic.

The costumes in The Inhumans are worse than I could have imagined. This is some discount halloween store shit. pic.twitter.com/DjE2jIuavE

Others who were more familiar with the comics noted that while Marvel likes to ground its more ridiculous hero costumes for more practical pieces, they did a poor job here. James Whitbrook of io9 gave an example of one Marvel could’ve used instead.

Also a reminder that the Inhumans show had the perfect "grounded" Karnak costume from the Ellis/Zaffino run to emulate and they didn't pic.twitter.com/jgOGwAVVau

Some people took the look at face value, noting that the low-budget feel could’ve been intentional.

Does anyone else kinda love that the #Inhumans look like they just stepped out of a low-budget, short-lived sci-fi series form the 1990s?

Also Read: Every Marvel Post-Credits Scene Leading Up to 'Guardians of the Galaxy vol. 2' (Videos)

However, the bulk of the criticism seems to center around Medusa, who has the ability to move and control her hair. In the comics, her hair is drawn as her most prominent feature, standing large and with a life of its own. In the photo, it looks more like normal hair, or a bad wig.

Since this is a still — and Medusa’s hair hasn’t been treated with special effects yet, as Buck mentions in the interview — maybe it’ll look better once it’s treated and in motion.

Expectations didn’t stop people from going all in though on comparisons and jokes.

I see no different… #Inhumans pic.twitter.com/T2nu7UYkdI

I can't stop staring at how weird Medusa's boobs look? I know that's a dumb nitpick but like, they're just staring at me. pic.twitter.com/NZCT7m5541

what's everybody talking about, the Inhumans show is looking great pic.twitter.com/KdSCYcYYQK

before vs after seeing that inhumans cast picture pic.twitter.com/MHIneNUoFN

But in the end, this is just an Entertainment Weekly photo. We’ll have to hold our judgment until the show premieres in September on ABC and in IMAX.

I'm going to wait to see #Inhumans before I judge it.
The photo looks really bad but that can change once the they are on TV.

I'm not digging the Inhumans costumes but most look stiff in staged EW shots. They'll look better in motion, with the right lighting. Relax.