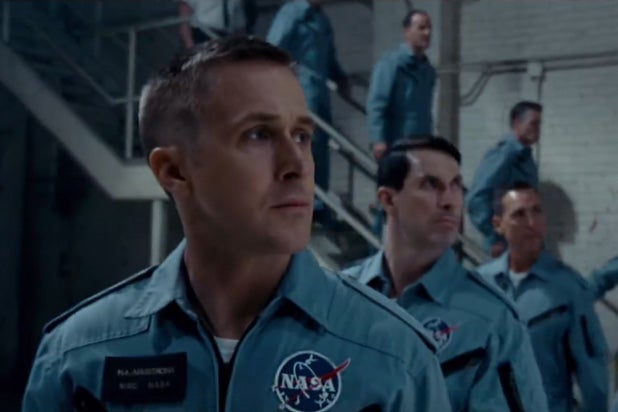 Those of us born in the late 1960s and beyond have always taken the Moon landing as a great accomplishment, yes, but also as something of a fait accompli. In his dynamic follow-up to “La La Land,” director Damien Chazelle reminds us that space exploration has always been risky and terrifying, with men closing themselves inside tiny metal machines that were created by other men, held together by rivets, and prone to a million mishaps.

From the heart-in-your-throat cold open, in which pilot Neil Armstrong (Ryan Gosling) takes a craft above the atmosphere but then struggles to bring it back down to Earth, to Armstrong’s eventual “giant leap for mankind,” “First Man” depicts the great accomplishments of NASA as huge gambles; like the best historical dramas, the film creates suspense over events whose outcome we already know. The U.S. government might have been driven by its desire not to let the Soviets win the space race, but the astronauts and the engineers who made these missions happen were far more interested in scientific progress and in their own survival.

Both screenwriter Josh Singer (“Spotlight”), adapting the book by James R. Hansen, and cinematographer Linus Sandgren (“Battle of the Sexes”) know when to tell this story in close-up, and when to pull out for a wider look. For much of the film, it’s an intimate portrait of Armstrong, a civilian engineer and pilot driven to join the Gemini space program even as he’s haunted by the death of his young daughter Karen from cancer. (After Mercury took us into space and before Apollo got us to the moon, Gemini helped perfect maneuvers that made Apollo possible.)

Getting inside the reticent Armstrong is certainly a challenge — per the film, he never talked about Karen, not even to wife Jan (Claire Foy) — but Gosling gives us glimpses into what drove this pioneer, whether it’s in his love of the math required to figure out thrust in space or in his relaxed moments around Jan and their sons. (It’s Jan who forces him to talk to the boys before he takes off on his moon mission; when they ask him questions, he answers them with the same reluctance he shows in press conferences.)

But “First Man” also acknowledges that the space program unfolded in a larger context: We see Vietnam on the news, talk-show footage of Kurt Vonnegut wondering if NASA’s budget might have been better spent on “a habitable New York,” and a montage set to Gil Scott-Heron’s epic track “Whitey’s on the Moon” (which wasn’t written until after the moon landing, granted, but it still works here).

The notion of how frightening it must have been inside those space capsules has been explored before, most notably in “The Right Stuff,” but Chazelle takes us further; when Armstrong climbs into Gemini 8 and it blasts off into the heavens, we’ve never felt this claustrophobia or listened to the creaking of the metal or felt the thrust of the rockets quite this way before in a movie. And no sooner do Armstrong and co-pilot Dave Scott (Christopher Abbott) feel the satisfaction of finding and docking with the Agena target vehicle than the two of them go hurtling through space, out of control, with Armstrong only just managing to stabilize the capsule before blacking out.

Gosling is fine here, although Armstrong’s emotional armor mostly leaves the actor playing a variation on his character in “Drive,” and except for one moment in which her British accent comes peeking out, Foy brings emotional power to a woman who has been mostly sidelined by history, keeping a brave face at home for her children while constantly worrying that her husband, like so many of his peers, just won’t come home one day.

(Foy’s Oscar-clip moment is admittedly delectable; she dresses down Kyle Chandler as Deke Slayton, who cuts off Jan’s access to the Gemini 8 radio feed when it looks like they won’t make it back. She tells him that, for all of NASA’s procedures and protocols, they are ultimately just boys making models out of balsa wood.)

“First Man” gives a bevy of talented character actors (including Ciarán Hinds, Pablo Schreiber, Ethan Embry, Jason Clarke, Shea Whigham, Cory Michael Smith and Patrick Fugit) the opportunity to step into the buzz cuts and boxy suits of the era; Corey Stoll’s cynical, mouthy Buzz Aldrin makes for an interesting foil to the hero. (“I’m just saying what you’re thinking,” says Aldrin, to which Armstrong tersely replies, “Maybe you shouldn’t.”) Lukas Haas as Mike Collins, the third astronaut on the Apollo 11 mission, doesn’t get a lot of dialogue, but the actor is enough of a pro to communicate volumes with just his face.

Overall, it’s an impressively mounted film, from the seamless visual effects to the score by Justin Hurwitz, which is flexible enough to accentuate both the film’s tension and its earthbound humanity, to the always exquisite editing by Tom Cross (“Whiplash”), which plays a key role in establishing the characters, the stakes and even the passage of time.

Space nerds will swoon for the vintage tech, and for the re-creation of historic moments both large and small. And in the grander sense, “First Man” reminds us — in an era of “truth isn’t truth,” “alternative facts,” and established science being treated like an opinion — that there was a time not all that long ago in which we (the taxpaying public, not just some bored billionaire) were capable of sending people into space and to the moon and back again. And we did it, to quote JFK, “not because it was easy, but because it was hard.” In an era of widespread hopelessness, it’s a lesson worth remembering.