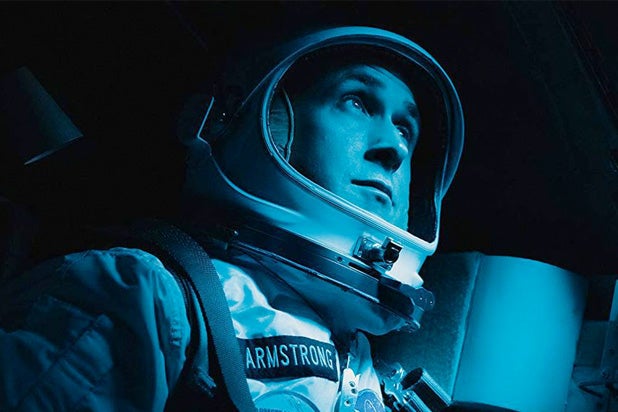 (Spoiler alert: Do not read on if you haven’t seen “First Man.”)

“First Man” is a retelling of one of the biggest moments in history, as well as a portrait of the reclusive man who became the first to walk on the moon.

Damien Chazelle’s drama starring Ryan Gosling as Neil Armstrong focuses more on the home life of the astronaut as he prepared for his dangerous missions into space.

That includes delving into the 1962 death of his daughter, Karen, of a malignant brain tumor at age two. Throughout the movie, Armstrong is seen holding his daughter’s bracelet — and even takes it to the moon and throws it into a giant crater there before returning home.

But how factual is that part? Did Armstrong really throw his daughter’s bracelet into the crater?

Long story short, no one really knows. According to an individual with knowledge of the project, Armstrong never talked about it but his sister feels that he might have done so, given that he had 11 minutes alone on the moon — mostly exploring what is known as the East Crater — where no one knows exactly what he did.

Screenwriter Josh Singer told TheWrap that he included the scene based on a conjecture formed by James R. Hansen, who wrote the biography, “First Man: The Life of Neil A. Armstrong,” on which the movie is based.

“For Jim, after spending two years pursuing Armstrong and spending hours interviewing him and Janet [his wife] and his sister and everybody else, Jim started to get the idea that maybe Neil left something personal on the moon,” Singer said.

“Leaving tokens on the moon for loved ones or lost ones was something that was regularly done. So Jim started to wonder if Neil left anything that belonged to Karen behind and started looking through the manifest for Neil’s personal property kit and Neil said he had lost it,” Singer said. “That didn’t sound like Neil, and in fact he hadn’t lost it. It’s in the Purdue archives and it’s in fact being kept under seal until 2022 or something. But perhaps he had misplaced, and it still felt odd.”

“Did he take something of Karen with him to the Moon?” Armstrong’s sister June asked Hansen rhetorically in the book. “Oh, I dearly hope so.”

While he did take his wife Janet’s olive branch pin to the moon, there’s also no evidence he brought anything for his two sons.

“I assumed he had taken things to give to the boys later, but I don’t believe he has ever given them anything,” Janet told Hansen. “Neil can be thoughtful, but he does not give much time to being thoughtful, or at least to expressing it.”

Buzz Aldrin and Armstrong did take personal kits to the moon, although Armstrong “never released any information about the contents of his PPK.”

“More concerned about getting every necessary object inside the LM, the astronauts almost forgot to leave a small packet of memorial items on the lunar surface,” the book reads. “Aldrin recalls the near oversight: ‘We were so busy that I was halfway up the ladder before Neil asked me if I had remembered to leave the mementos we had brought along. I had completely forgotten. What we had hoped to make into a brief ceremony, had there been time, ended almost as an afterthought. I reached into my shoulder pocket, pulled the packet out and tossed it onto the surface.’ The packet contained two Soviet-made medals, in honor of deceases cosmonauts Yuri Gagarin, the first human to orbit the Earth, who died in a MiG-15 accident in March 1967; and Vladimir Komarov, killed a month after Gagarin at the conclusion of his Soyuz 1 flight when his spacecraft’s descent parachute failed to open. Also in the packet was an Apollo 1 patch commemorating Gus Grissom, Ed White and Roger Chaffee. Also inside was a small gold olive-branch pin, symbolic of the peaceful nature of the American Moon landing program. The token was identical to the pins that the three Apollo 11 astronauts were carrying as gifts from their wives.”

“I didn’t bring anything else for myself,” Armstrong said. “At least not that I can remember.” Janet Armstrong said her husband “didn’t ask” if she wanted to send anything.

“I don’t think we really wanted to talk totally open about what it was,” Aldrin said in the book. “So it was sort of guarded.” He then said Armstrong straightened out the packet that had some dust on it after landing to Armstrong’s right.

Hansen noted that Armstrong said he would reveal the contents of his package for the biography, but was “unable to find the manifest among his many papers.” All he said was, “in my PPK I had some Apollo 11 medallions, some jewelry for my wife and mother [simply the gold olive branch pin for each], and some things for other people.”

What’s most clear, however, is that Armstrong took pieces of the Wright brothers’ historic flyer with him that he arranged with the U.S. Air Force Museum in Dayton, Ohio. The book also noted he took along his college fraternity pin from Purdue, which he later donated to the Phi Delta Theta headquarters in Oxford, Ohio.

Singer said that given Hansen’s conjecture and accounts from Janet Armstrong and Armstrong’s sister, they felt they could take the license to include Karen’s bracelet.

“We felt this responsibility to him and to the accuracy of the story to do this right because some of the things we put in the script were quite provocative,” he explained. “I never would have taken license and made up the bracelet from whole cloth.”

Armstrong died in 2012 due to complications after heart bypass surgery.