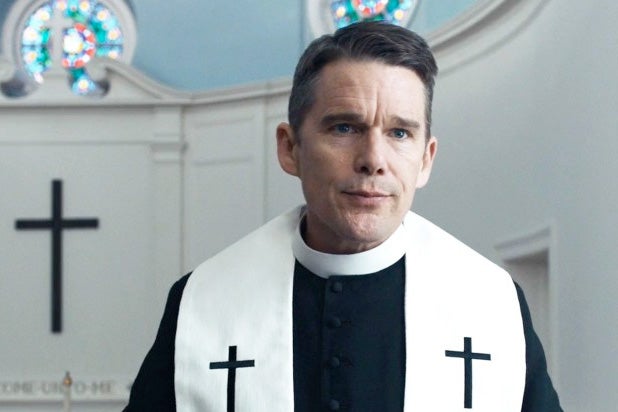 Before he wrote and directed movies, Paul Schrader was a film critic, best known for his book “Transcendental Style in Film: Ozu, Bresson, Dreyer.” Director Robert Bresson’s “Diary of a Country Priest” has always been a key film for Schrader, with Bresson’s ascetic Catholicism mirroring Schrader’s fully-absorbed Calvinism. And now Schrader has made “First Reformed,” a film that even freshman film students will be able to easily connect to this influential earlier movie.

“First Reformed” is about a country priest, and he keeps a diary. And, like the hero of Bresson’s film (and the Georges Bernanos novel on which it is based), he’s got stomach cancer. (Bresson’s hero lived on bread and wine; Schrader’s prefers whiskey, but tells a concerned colleague that his only alcoholic intake is “a little wine with dinner.”)

There’s more than homage going on here, though. As Schrader’s hero takes a bleaker look at life, and considers committing an extreme act as a desperate attempt to find resonance and morality in the world, he stands alongside the protagonists of such Schrader-written films as “Taxi Driver,” “American Gigolo” and “Light Sleeper,” three works the filmmaker has connected as his “night trilogy.”

The priest is Reverend Toller (Ethan Hawke), and he tends to a small, barely-attended church that remains open solely because of its historical import; located in upstate New York, the church was once a stop on the Underground Railroad for Canada-bound escaped slaves. Nowadays, it’s mainly a tourist attraction that operates under the aegis of a larger mega-church run by the affable Jeffers (Cedric Antonio Kyles, better known as Cedric the Entertainer).

One of Toller’s few parishioners, Mary (Amanda Seyfried) asks him to counsel her husband Michael (Philip Ettinger, “Compliance”); Mary is pregnant, but Michael, a committed environmental activist, thinks it’s immoral to bring a child into this decaying world.

Spending time with Michael convinces Toller that God objects to man’s destruction of the world, which puts him in an awkward position with Barq (Michael Gaston, “The Leftovers”), a wealthy local industrialist — and major contributor to both churches — who happens also to be a world-class polluter.

But “First Reformed” is less about that plot than it is character, and Schrader and Hawke have collaborated on a searing portrait. Toller is devout in his faith, and he can be good with people, but he bears the pain of having a child die (which in turn destroyed his marriage), making him believe that he will never know love again. He had a brief affair with his well-meaning assistant Esther (Victoria Hill, “December Boys”) but now keeps her at arm’s length before devastating her with a cruel verbal kiss-off; Schrader at least grants the character the grace of performing a lovely rendition of “Leaning on the Everlasting Arms” over the film’s denouement.

This is Schrader at his sparest; characters rarely look warm — the cinematography by Alexander Dynan (“Dog Eat Dog”) accentuates the wintry bleakness — the camera rarely moves during scenes, silences and awkward pauses abound, and the score by Brian Williams is used sparingly, but always effectively.

As ever, the director has a real gift at working with actors; Richard Pryor’s dramatic chops surprised viewers of Schrader’s “Blue Collar” back in 1978, and Cedric the Entertainer’s solid turn here should do likewise. Seyfried’s verge-of-tears acting has never gotten so powerful a context, and Ettinger’s chilling intensity makes an impact over just a few scenes.

This is Hawke’s show all the way, though, and he’s never less than astonishing to watch. Plumbing the depths of Toller’s despair takes him to places we’ve never seen him go on film before, and the results are electrifying even as they are mournful.

Toller’s misery builds to an ending that some will find perfect and others confounding, but either way, it’s sure to be discussed. (Personally, I lean toward letting the mystery be, so it worked for me.) Paul Schrader has always been a faith-based filmmaker in the truest and most challenging sense, and “First Reformed” is the sort of stimulating work that a writer-director of a certain age can deliver when he returns to his creative sweet spot; rejoice, Schrader fans, rejoice.