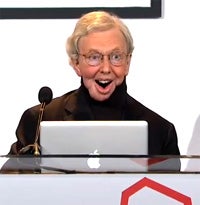 The Webby Awards were presented Monday night in New York. It is the so-called Oscars of the Internet, with Web-sters doing their best version of a black tie. But unlike the Oscars, there’s little drama at the annual gala – with the winners having been announced weeks ago.

The only real suspense – aside from which celebrities might show up in Lower Manhattan – lies in the signature five-word acceptance speeches. (Imagine how perfectly short the Academy Awards would be if they tried that.)

Here are the five best from last night (click the links for video):

Highlights of those and more, in 90 seconds: