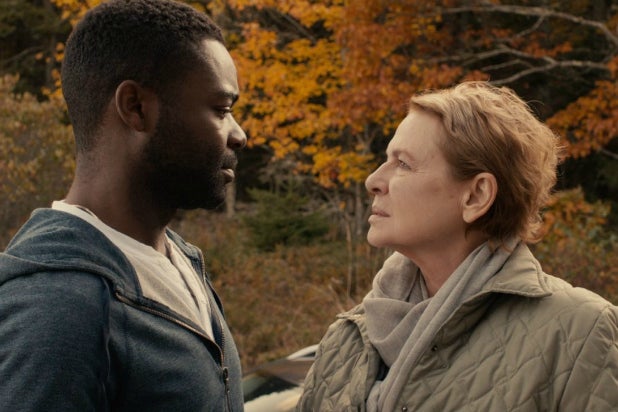 As “Five Nights in Maine” begins, the death of his wife Fiona (Hani Furstenberg) has stunned Sherwin (David Oyelowo) into near-immobility. Balled up on the couch, he drinks, sleeps, and drinks again, avoiding all but the most insistent responsibilities. The widower’s withdrawal into loss doesn’t just pull him away from support; it nearly strips him of kindness. He’s a jerk to those offering support; his sister (an effective Teyonah Parris, in a brief appearance) shoulders the burden of funeral prep.

An invite from Fiona’s cancer-stricken mother Lucinda (Dianne Wiest) leads to an impulsive Atlanta-to-Maine pilgrimage. In northern New England, Sherwin, now physically isolated as a mirror to his exclusionary mood, finds his needs grating against Lucinda’s own deep sorrow. Shrewd, tough, and closed-off, the bed-ridden Lucinda isn’t the most welcoming host, but Sherwin’s guarded attitude hardly fosters a connection. Prior enmity between Lucinda and her daughter hangs like smoke in the air, and the two approach one another with exceeding wariness.

Writer-director Maris Curran (“Edge of the Road”) has all the ingredients for a deep dive into the parallel but not quite complementary senses of loss felt by the two characters. Yet she rarely follows up on opportunities to thoroughly explore the two primary characters. “Five Nights in Maine” is, like the film’s small-town inhabitants, distant and detached.

Questions cloud the story: Is Sherwin’s manner indicative of who he was only days before tragedy remapped his life, or is he withering under grief’s shadow? Brief flashbacks of married life hint at both happiness and discord, but we never understand the full nature of any of the film’s many wispy relationships.

Curran’s script is episodic and elliptical, with ideas and images that hang without explicit resolution. Atypical as it is, the approach is an effective way to sketch in minor character notes and behavior. A brief encounter with one of his late wife’s family members tells Sherwin (and us) much about the local social landscape; a clumsy moment in the kitchen emphasizes Sherwin as distracted and a bit cagey, but not ill-willed.

The accumulation of minor details contributes spots of clarity, like spots buffed clean in a large, cloudy window. They do not, however, offer any depth of understanding. Sherwin and Lucinda remain perpetually out of reach, even as the camera hovers close, suggesting we might, any minute now, find some true insight into their states of mind or understanding of their history.

Curran guides the cast to commendable performances across the board, with Oyelowo and Wiest delivering controlled, nuanced work to fill in the script’s generous negative space. Rosie Perez appears here and there as Lucinda’s nurse, providing the film’s most accessibly comfortable moments. Her open humanity is appealing, and yet ultimately this character is no more full than any other in the movie.

“Five Nights in Maine” suggests specifics about Sherwin, Fiona and their life, but is ultimately evasive, leaving Oyelowo to stare despondently into the middle distance. Oyelowo does despondent well — he does everything well — but entirely too much is left to his teary gaze and the image of his form gliding through a nearly deserted house. “Five Nights in Maine” is populated by ghosts, their movements darkly impulsive and inscrutable, their manner representative of the film’s overall tenor.

Once or twice the clash of wills between Oyelowo and Wiest nearly builds to something that could melt the stasis. If only one would thoroughly disrupt the stillness, we might see the emotional head to head the two actors are clearly capable of performing.

Restraint is a good impulse when dealing with such a simple story of grief, and Curran’s approach does lead to good incidental visions of each character’s devastated state. Yet “Five Nights in Maine” is as frustrating as it is mannered; we never see these characters truly engaging the pain they clearly feel. Handsomely produced and almost rigorously brief in its 82-minute running time, this film, like its subjects, keeps true emotional investment at bay, and suffers for it.