One of the screen’s greatest legends has been taken from us, and you will read any number of obituaries and remembrances that will cite Peter O’Toole’s legendary performances in “Lawrence of Arabia,” “Becket,” “The Ruling Class,” “The Stunt Man” and “My Favorite Year,” and well they should. 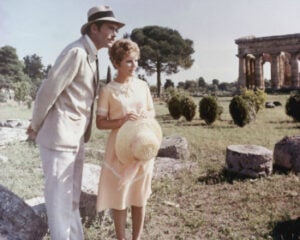 With a screen career that spans nearly 60 years, however, O’Toole’s film achievements are many, and it’s possible that you may have missed some of his other bright and shining moments.

Here are five of my personal favorites, among a career that had no shortage of highlights:

“How to Steal a Million” (1966): This fluffy caper comedy is built mostly as a vehicle for Audrey Hepburn, but she and O’Toole generate real chemistry as, respectively, a forger’s daughter and a mysterious stranger who arrange to steal a Cellini statue of Venus from a Paris art museum before curators figure out that it’s a fake. Even if “Million” was designed to follow the blueprint of Hepburn’s earlier hit “Charade,” the later film has its own quirky sense of humor, and O’Toole takes a mostly thankless role and injects it with enough sex and danger to keep it interesting.

“Goodbye, Mr. Chips” (1969): Many viewers probably chalk this one up in O’Toole’s “misfire” column — assuming the lead in a musical without possessing a trained voice, and taking on the role of the headmaster from James Hilton’s beloved novel that had already won an Oscar for Robert Donat in 1939 was going to be thankless from the get-go. But I find O’Toole delightful here, whether he’s talk-singing his way through “What a Lot of Flowers” or blossoming romantically under the tutelage of music-hall performer Petula Clark, with whom he has a real rapport.

“Svengali” (1983): This updating of the legendary tale of the manipulative older man and the young naïf whom he enables on her path to stardom features O’Toole in full flourish, guiding Jodie Foster as a young singer who benefits from, and eventually chafes under, his influence. O’Toole’s puppet-master is demanding, sarcastic and never less than utterly engaging, coming of the heels of his early-’80s triumphs with “The Stunt Man” and “My Favorite Year.” And unusually for TV movies of the era, it’s one you can still get on DVD.

Also read: Peter O’Toole Retiring From Acting: ‘The Heart of It Has Gone Out of Me’

“Bright Young Things” (2003): Stephen Fry‘s brilliantly acrid adaptation of Evelyn Waugh’s “Vile Bodies” has no shortage of British eccentrics, but they all take a back seat to O’Toole’s Colonel Blount, who seems to be operating in a dimension entirely his own. Dotty and circumloquacious, the good colonel pops up in only a few scenes of the film, but O’Toole’s wonderfully whacked-out performance stays in the memory.

“Lassie” (2005): It’s the Christmas season, which is the perfect time to catch up with this under-seen, lovely adaptation of the original novel about the devoted collie and her trek home to be with the boy she loves. O’Toole plays the Duke, who purchases the dog from the working-class family who can no longer afford to keep her, and while he and his granddaughter try to give the titular canine a good home, Lassie knows where she belongs. This poignant movie is never gooey or sentimental, thanks in part to a powerhouse cast that includes not only O’Toole but also Samantha Morton, Peter Dinklage, John Lynch and Kelly MacDonald.