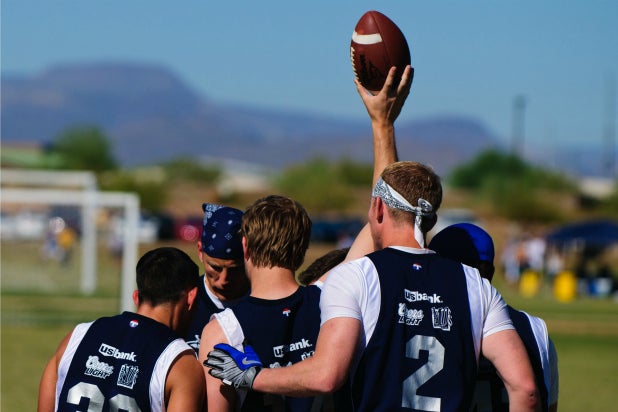 Director Seth Greenleaf’s “F(l)ag Football” documents the training sessions of a motley group of gay football players as they prepare to play in the National Gay Flag Football Championship, a competition started by sports journalist Cyd Zeigler in 2002. These guys are big on lame bromides in the first scenes of the film (“Football is one of those games that teaches you life lessons”), but they eventually open up for the camera and have much more interesting and complicated things to say about themselves.

Just six NFL football players have come out of the closet as gay, and this was only after they retired. (Michael Sam was the first out gay player to get drafted into the league in 2014, but he was released by the St. Louis Rams before the start of the regular season.) Of the men profiled here, a guy who is nicknamed “Roc” is the one who looks like he could have had a pro career in the NFL, but he says that he wanted to be “free” in his personal life instead.

There are times when it feels as if some of the football players in “F(l)ag Football” are eager to imitate the more toxic forms of masculinity. A player nicknamed “Tall Paul” says, “If the opposition is not hating you, you’re doing something wrong.” Like some of the other guys in this movie, Paul is not out to his parents. Wade Davis, who is the head of the New York team, was rejected by his beloved mother after he came out to her, and Zeigler says that he has an “antagonistic” relationship with his father that settles down when they bond over their love of football.

But as the film goes on, we do meet different sorts of people on these teams, and they often go against various stereotypes and boxes in which we might want to place them. Joey Jacinto does drag shows to raise money for the team and for younger sports players who are trying to be out of the closet at an earlier age. A transgender player named Molly is very physical and combative, yet she feels that the teams are all about “inclusion” and “competitiveness is secondary.”

This inclusiveness can have its comic side: Zeigler allows heterosexual players into the group, but the teams can only be 20 percent straight, and so there comes a time when one guy is dropped just because he isn’t gay. He complains about it in such a low-stakes, hippie-like way that it starts to feel like a sketch on “Saturday Night Live.”

There isn’t much deliberate humor in this movie, even when a player cries, “Eyes on his hips, not his arms!” And there isn’t much mention of sexuality except for a brief conversation about attraction to other team members between Tall Paul and a cop named John who used to be his boyfriend. Tall Paul says that even if a guy was his exact type and naked on the field in front of him that he would not be swayed from his goal. But John is more honest, admitting that he would be aware of being attracted until the play started, and then his sports side would kick in.

“Winning heals all wounds,” Zeigler says at one point, but of course this depends on your definition of “winning.” Maybe these guys all love football so much because of its strictly defined limits, and also because of the male bonding involved. They all clearly want to feel like part of a group because they felt excluded when they were younger, and on that level what they are doing together feels modestly touching.

There is a fraught moment before the play-offs here when some of the players stay together in one big house and some very politically incorrect tags are put up on the doors. It is clear that some of the guys are uncomfortable with these “jokes,” but being part of a masculine unit like this seems to entail putting up with the bad as well as the good — and even pretending to like or admire the bad side of it.

The last section of “F(l)ag Football” gets lost in the playoff games themselves, but Greenleaf finally lets his camera ogle the bodies on display and the ass-smacking camaraderie is allowed to feel somewhat homoerotic. Most of these guys want to be “guys” in the most conventional ways, but at its best, this is a movie about how deviations from that norm can still be taken in and accepted and even championed.