“The Flash” is back Tuesday night with part four of its five-part “Armageddon” event on The CW — and with this episode, Alex Danvers joins the fold. Chyler Leigh is playing her “Supergirl” character for the massive event and she was thrilled to don her Sentinel supersuit once more. And, should the Arrowverse ever need her again, she’s ready to go.

“I’ll be honest, I would go back in a heartbeat. I would,” Leigh, whose own series, “Supergirl,” recently concluded, told TheWrap. “I just love Alex and I love being part of just The CW/DC family and whatnot. And I’m still having a hard time thinking like, ‘How am I ever going to stand the same?’ Because I think I’m always going to have the Alex stance. … I’ve got to think from a physical standpoint, ‘I’m going to have to untrain how to be a superhero.'”

For “Armageddon” though, that stance and really everything Leigh did for six years as Alex Danvers, made doing the event a bit easier. 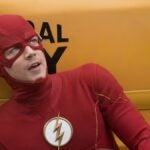 “To be able to be Alex and everything that I’ve spent six years building and to be able to step on someone else’s set and just stand confidently in that — it just made it really fun to kind of play with the different nuances,” Leigh said.

Granted, for “Supergirl” fans, it might be a bit bittersweet seeing Sentinel working with a new set of Super Friends, even temporarily. But for Leigh herself, it was really just a lot of fun — particularly because she got an up-close look at those people’s super suits.

“You get to see everybody’s suits, [and] you go, ‘Wow, yours does this? Cool, Mine does that,'” Leigh recounted. “And all of a sudden [you’re] children again …  you’re playing dress up, you’re playing make believe and so it was fun to do it with different people because you almost get to kind of see, ‘Oh, OK, that’s your take,’ and like, ‘Oh, this is how I stand,’ and it’s not [like] you’re critical, it’s just kind of like, ‘Wow, this is what you’ve come up with over the years that you’ve been in these suits or these characters.'” 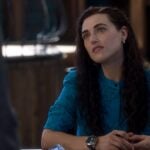 To be clear, yes, Leigh did miss having Nicole Maines and Melissa Benoist and the rest of her cast by her side. Still though, she had a ball.

“It’s definitely different not having — I didn’t have Dreamer, and Brainy obviously, you know, Supergirl or J’onn. It’s like J’onn and Kara/Supergirl that’s just — we’re the OGs, right? It’s definitely strange, but I’ve had enough dealings where I’ve beaten up bad guys, on my own. And then to be able to join up with others, outside of what I’ve already done was really cool.”

“The Flash” returns with “Armageddon: Part Four” tonight at 8/7c on The CW.