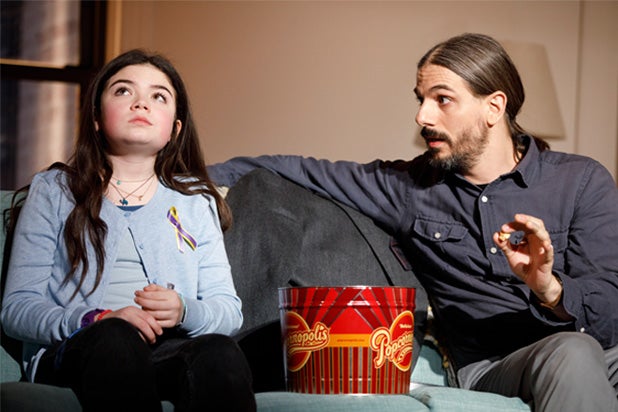 A play can sometimes be too topical for its own good. Take Lindsey Ferrentino’s “This Flat Earth,” which had its world premiere Monday at Off Broadway’s Playwrights Horizons. Two teenagers, Julie (Ella Kennedy Davis) and Zander (Ian Saint-Germain), are seated on her bed, attempting to negotiate a first kiss. They’re home on a school day, and it soon becomes apparent that a violent incident has radically disrupted their usual weekday schedule. Later, Julie screams at her father (Lucas Papaelias) about adults failing to protect children from the kind of school shooting that took the lives of her classmates.

Ferrentino (“Amy and the Orphans”) uses that ripped-from-the-headlines moment, but never constructs a cogent story to give life to the issue of gun violence. At every turn in her plot, “This Flat Earth” appears contrived, and it’s here that her play’s topicality actually works against the drama. There’s not one Parkland, Florida, high school survivor who has claimed that he or she didn’t know gun violence was an ongoing national problem.

Ferrentino’s Julie, on the other hand, is shocked to learn that the shooting at her school is just “another” violent incident in a long, bloody chain of them. The playwright gives no indication that her character never watches TV, possesses some mental problem or is attending Columbine High School on April 20, 1999. According to the script, the time of “This Flat Earth” is “the recent past.”

The other major plot development, besides Julie’s ostrich-like question, is that one of the victim’s mother (Cassie Beck) finds reason to have the teenager dismissed from the school. This story line works in the new “Mean Girls” musical, which is a cartoon. In “This Flat Earth,” it makes that awkward first kiss between Julie and Zander loom large as the only identifiable event dramatized on stage.

Julie occasionally uses the fire escape to visit the old woman (Lynda Gravatt) living in the upstairs apartment. We see her there throughout the play, and she doesn’t serve much purpose except at the very end when Julie asks about what the future holds and the old woman morphs into Madame Arcati from “Blithe Spirit” to give a blow-by-blow account of Julie’s life.

Curiously, this example of future nostalgia is the only arresting moment in the play. Rebecca Taichman directs, and she is at her best when giving us moments of fantasy in plays like “Indecent,” “How to Transcend a Happy Marriage” and the recent “Time and the Conways” revival. Also, Gravatt emerges as a calming presence after all the jittery acting that precedes her.

For the record, the significance of the title “This Flat Earth” is revealed in the play’s penultimate scene. People used to think the earth was flat, we’re told, so maybe one day gun violence will also be a myth? Yes, and the Second Amendment will be repealed any century now.