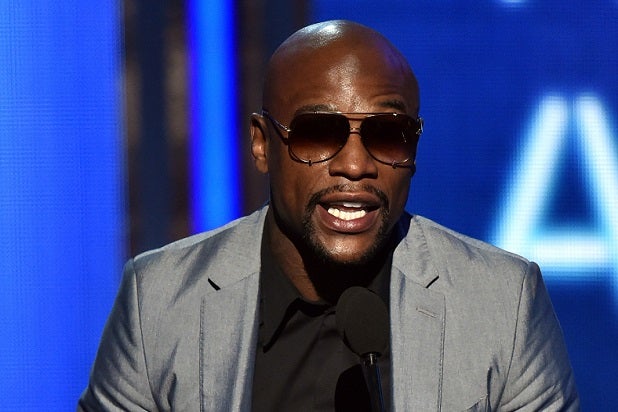 Fresh off of his victory in the ring against Manny Pacquiao, boxer Floyd Mayweather Jr. is facing another battle, this one in the legal system.

Mayweather has been slapped with a $20 million by his ex-girlfriend Josie Harris, who claims Mayweather defamed her during an April interview with Katie Couric.

In the suit, filed Tuesday in Los Angeles Superior Court, Harris, who has three children with Mayweather, claims that the boxer falsely painted her as a drug abuser while discussing a 2010 domestic violence incident against Harris.

“Mayweather knowingly and maliciously lied about his beating of Harris, disclaiming any responsibility for the attack and Harris’ resulting serious injuries,” the suit reads, “Instead, Mayweather pointed his finger at Harris, labeling her as a drug abuser and an aggressor who the world-class boxer had to ‘restrain.'”

In 2011, Mayweather was sentenced to 90 days in jail after pleading guilty to a battery domestic violence charge in relation to the 2010 incident, which took place in front of two of their children.

“Did I kick, stomp and beat someone? No, that didn’t happen. I look in your face and say, ‘No, that didn’t happen,'” Mayweather told Couric during the interview, the lawsuit notes. “Did I restrain a woman that was on drugs? Yes, I did. So if they say that’s domestic violence, then, you know what? I’m guilty. I’m guilty of restraining someone.”

Harris’ lawsuit characterizes Mayweather’s account as “totally and unequivocally false and defamatory. The true facts are that Harris was not a drug abuser or drug addict. Harris did not need to be ‘restrained’ because she was on drugs.”

The suit continues, “ statements paint a clear picture that Harris lied when she told the police that Mayweather repeatedly struck and beat her.”

Not only did Mayweather’s statements result in “severe” damage to Harris’ personal reputation, the suit claims, but they harmed her professionally as well.

“As an aspiring television personality and author, Harris would become unemployable and unpublishable if potential employers or publishers believe that she is, or even might be, a drug abuser or addict, as Mayweather implies in the interview,” the suit reads.

A spokesperson for Mayweather has not yet responded to TheWrap’s request for comment.