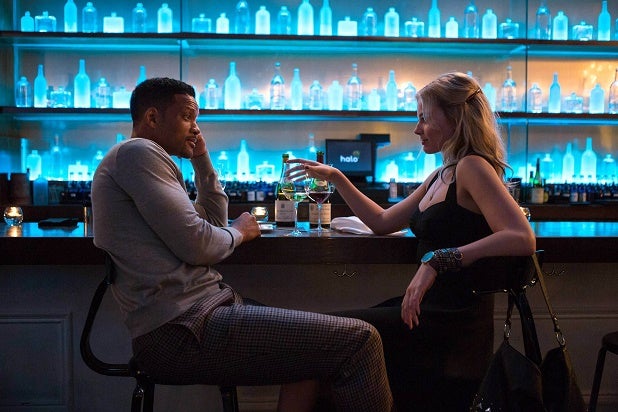 At a certain point in the proceedings in ‘Focus,” after veteran con man, hustler and pickpocket Nicky (Will Smith) has taken the less-skilled but eager Jess (Margot Robbie) under his wing but before the film’s finale of revelations and reverses, there’s a single moment that sums up this new cinematic cocktail from writer-directors Glenn Ficarra and John Requa (“Crazy Stupid Love,” “I Love You Phillip Morris”).

It’s too good to over-explain, but it involves a filmmaking choice of seemingly cliché overfamiliarity that’s then explained to be fraught with meaning, and all part of Nicky’s plan. And a moment that initially made you slump in your seat with seen-it-all weariness suddenly has you upright with curiosity and glee like a kid straining to see a magic trick again so he can maybe catch how it really works.

“Focus” knows exactly what kind of film it is, but even more importantly, it knows that we know what kind of film it is. And while our attention is elsewhere looking at what we expect it to do, it often does something else entirely. As Nicky explains during a Pickpocketing 101 lesson to Jess on a snowy night in New York, “Get their focus, you can get whatever you want.” Of course, Ficarra and Requa are aided in their objectives by the simple fact that we are also, often, looking at Smith and Robbie (“Wolf of Wall Street,” the upcoming “Z for Zachariah”).

Smith has always been easy to watch, but it’s worth noting that Smith can bottom out in a film that’s too shallow even for him (“Hitch”) or get drowned in material too dark and deep (“After Earth”). Smith is at his best when he’s balancing on the line between cool and clueless, between triumph and failure, between getting away with it and getting found out. Ficarra and Requa get that, and they use it.

As the at first unlikely Eliza to Smith’s Henry Higgins, Margot Robbie is excellent, an avid climber with more enthusiasm that finesse. Robbie may be a classical beauty, but it’s also worth noting that her charisma on-screen is far more a function of the light in her eyes and the shape of her smile than it is of the proportions and form of her physique. Her Jess is strangely vulnerable and brassy, at first falling for Nicky before he has second thoughts and then, later, seemingly reinvented as either a sweet romantic who got out of the game or laying in wait as a schemer with what seems like a heart of lead.

Edited superbly by Jan Kovac in his feature-film debut, the film goes from Nicky and Jess’ meeting in New York to their working a football championship in New Orleans before jumping ahead three years later to Buenos Aires. Nicky’s been hired by racing titan Garriga (Rodrigo Santoro) to fake out his competition; it’s an easy job that gets trickier when Nicky sees Jess waft down a staircase in a couture red dress to be at Garriga’s side.  Is it a fateful reunion, or a carefully-constructed trap?

The film’s delights don’t just include high-speed tag-team pickpocketing as conducted by masters (real-life genius pickpocket Apollo Robbins is credited as a consultant, and has a blink-and-you’ll-miss-it cameo). Ficarra and Requa also know what to do with their supporting actors, from B.D. Wong as a giddy, goofy gambling man to Gerald McRaney as Garriga’s right-hand-thug, armed with a thousand-yard-stare and an arsenal of colorful phrases.

Cinematographer Xavier Pérez Grobet (“Enough Said”) makes everything look like a three-way melding of a liquor ad, a Vanity Fair spread and a fashion show, and I mean that as a compliment; the film’s luxe look contrasts nicely with the blue-collar hustle and sweat of Nicky’s crew of confederates, and much of the action — a hotel hall full of conned husbands, a thug’s careful preparations for ramming a car — comes in single-take moments delivered with exquisite comedic timing or grim resolve or both. Like a perfect cocktail mixes the sour with the sweet and the bright with the boozy, “Focus” combines seamless, superbly-crafted filmmaking with the fizz and fun created by its leads.