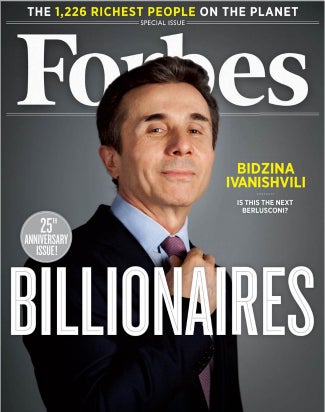 Forbes magazine seems to be bucking the downward trend for print magazines, with the near-century-old publication hitting its highest readership level ever in the U.S. after an increase of more than a million readers in the past year, according to one media research company.

Forbes jumped in readership from about 5.1 million last spring to roughly 6.1 million this one — an increase of more than 20 percent, according to the German-based media research company GfK MRI. In doing so, it remains the most read business magazine in the U.S., besting its nearest competitor, Fortune, by 2.5 million readers.

“This is still a golden era for magazines — if done right,” Randall Lane, editor of Forbes magazine explained to TheWrap. “We’re getting more readers, younger readers, richer readers — that’s a good business to base off.”

Forbes has been trying to find a buyer since last November, when it hired Deutsche Bank to explore a sale of the media company, of which the Forbes family is a majority owner. According to a Bloomberg report in April, the sale process has foundered as various international bidders have bowed out, though an insider told TheWrap that there are still active bids.

Forbes Media spokesperson Mia Carbonell told TheWrap: “The sale process is active and ongoing, and we continue to remain excited and enthusiastic about the outcome.”

According to the Alliance of Audited Media, Forbes Magazine’s circulation has remained more or less stable in recent years at 932,884.

Like many publications, Forbes has been hit hard by the downturn in print advertising and the accelerated pace of digital news gathering and consumption. However, the magazine remains profitable, with earnings estimated to reach $33 million this year. Forbes projected revenue of $144.6 million for 2013 and $162.8 million for 2014, according to the pitch book obtained by Ken Doctor, a media analyst for Outsell Inc.

The size of the magazine has stayed steady at a minimum of 112 pages and the average price per issue has actually increased for special issues (“Billionaires,” “Forbes 100”). The pricing of regular issues has not changed during the growth period.

The growth in print readership has accompanied growth in the Forbes.com website, doubling its worldwide unique readers in four years from 12.1 million to 25.2 million April 2010 to 2014, according to comScore.

Still, Lane doesn’t believe that the growth is a unique opportunity just for a brand like Forbes. And he certainly doesn’t echo the common journalistic sentiment that “print is dead.”

“The only reason a magazine fails is if it fails to appreciate why people pick up magazines,” said Lane. “Instead of making shorter articles — which is kind of a trend with a lot of people — we’ve been doing longer articles, because magazines are great for that deep dive.”

He added: “It’s hard to read 3,000 words online. It’s a better experience on the train, at the beach, in their living room chair.”

The facts of the magazine business, however, have not been auspicious for long or short form. Ad pages for the industry fell an average of 8.2% in 2012, according to research by the Pew Center, with the declines even greater for news magazines like The New Yorker, The Atlantic, The Economist and Time.

One of Lane’s explanations for Forbes’ increased circulation is a greater investment in photography with a partnership with Corbis.

Germany’s Axel Springer SE, which publishes the Russian edition of the magazine, said in April it was no longer interested in bidding for the magazine.  Singapore’s Spice Global Investments Pvt also removed itself from the process, as did China’s Fosun International Ltd.