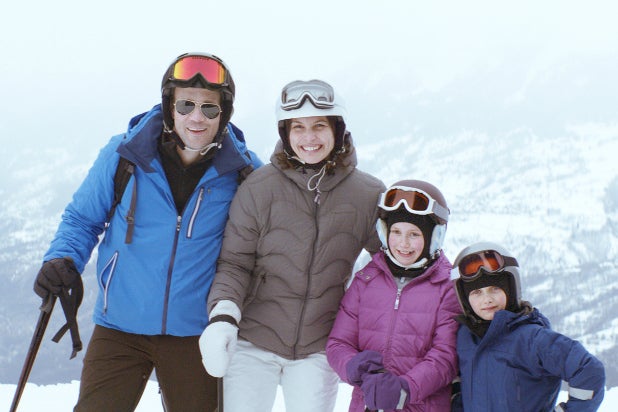 “Force Majeure” kicks off with a doozy of what playwrights would call an “instigating incident” and then traces the repercussions through not just a vacationing Swedish family but also the people close to them.

Sweden’s official entry to the Academy Awards puts its characters, and the audience, through an emotional wringer, but it’s also quite funny in a bleak, deadpan kind of way.

If you thought “Gone Girl” was the last word in date night movies that inspire awkward conversations, “Force Majeure” ups the game.

When we first meet the film’s family — dad Tomas (Johannes Bah Kuhnke), mom Ebba (Lisa Loven Kongsli), and their two children — they’re being photographed on a mountaintop at a French ski resort, the perfect picture of robust athleticism and happiness, all in coordinating parkas. And if we’ve learned anything from the movies, any family that looks this happy in the first scene is hiding cracks beneath their veneer of perfection.

Those flaws are mostly well hidden at first: the family shares a bed (in matching long-johns), but work-obsessed Tomas can’t stop checking his phone; doting Ebba can’t help feeling a stab of jealousy when she meets a female tourist who is on her own, having left the kids at home.

Everything comes to head one day at lunch, when the resort sets off one of its controlled avalanches to send more powder down to the ski slopes. A cloud of snow engulfs the patio where the family is eating, and while Ebba stays close to the kids and tries to protect them (from what turns out to be merely fog), Tomas grabs his phone and runs to safety.

In front of strangers (one of whom is played by U.S. actor Brady Corbet) at dinner, Ebba brings up the incident, but Tomas can’t acknowledge her version of events. They agree to put the matter behind them, but when Tomas’ old friend Mats (Kristofer Hivju, “Game of Thrones”) visits with his much-younger girlfriend, Ebba tells them the story and makes Tomas show his phone footage, which reveals his actions during the avalanche.

Also read: 10 People, Places and Things to Remember From the Cannes Film Festival

Tomas’ moment of indecision drives a wedge between the couple, between Tomas and his kids, and even between Mats and his girlfriend, who begins to wonder out loud whether or not she should be involved with a man who abandoned his own wife and children.

Writer-director Ruben Ostlund (“Play”) brilliantly mines this dark material for awkward hilarity; Tomas’ behavior during the avalanche goes from being the thing that no one wants to talk about to the subject that can’t be avoided, coming up over and over again and rattling these characters to their core, creating a crisis within the family and to the very heart of Tomas’ masculinity and fatherhood. (If the four adult protagonists ever want to reteam for a Swedish-language remake of “Who’s Afraid of Virginia Woolf?” they’ve definitely got the chops.)

Cinematographer Fredrik Wenzel and editor Jacob Secher Schulsinger (“Nymphomaniac”) play out long takes, allowing us to take in fleeting bits of information (this movie offers the most passive-aggressive teeth-brushing scenes since “Mr. & Mrs. Smith”) while also generating nervous laughter. Wenzel gives the ski resort a tourist-brochure gleam, but by the end of the movie, you’ll think twice about wanting to go schussing anytime soon.

The ending, incidentally, is where “Force Majeure” runs out of steam; after such masterful storytelling, the climax disappointingly fizzles. It’s not enough of a bellyflop, however, to keep you from enjoying the rest of the exhilarating run.