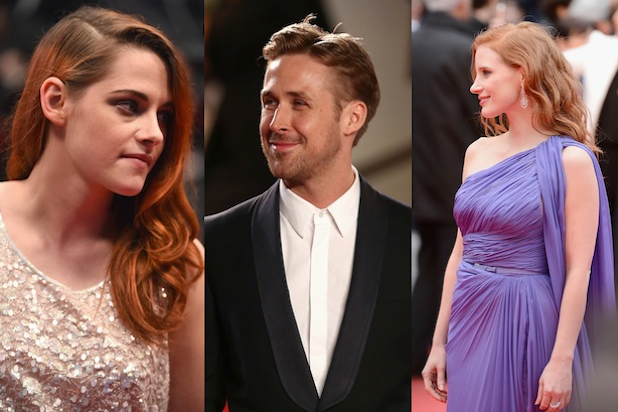 The 67th Cannes Film Festival officially comes to an end on Sunday, with a screening of the Palme d’Or winner “Winter Sleep” to conclude 12 days of screenings, press conferences, photo opportunities, red carpets, parties and deal-making on the French Riviera.

Its final day was quieter than usual, because the awards ceremony was moved from its usual Sunday slot to Saturday night because of European elections. But it also provides an opportunity to consider all that’s gone on along the Croisette over the last two weeks — as a Sergio Leone movie screened on the beach one night puts it, “The Good, the Bad and the Ugly.”

While at the halfway point I asked, “Where’s the excitement?,” in truth Cannes did have a strong lineup this year, with nothing dominating the way “Blue Is the Warmest Color” did last year or “Amour” did the year before.

It introduced a few Oscar contenders, put Ryan Gosling‘s new career in a harsh spotlight and let Robert Pattinson continue his career makeover, and threw a lot of parties that attracted Justin Bieber, Lindsay Lohan and Paris Hilton. It was about cinema, and it was about lots of other stuff. Here are 10 people, places and things to remember:

David Cronenberg and Bruce Wagner Get Vicious. One of the most delightfully dark and twisted films of a festival filled with dark and twisted films was “Maps to the Stars,” David Cronenberg’s take on a Hollywood filled with needy, desperate people ready to do anything to be noticed. From the pen of longtime Hollywood satirist Bruce Wagner, the film mixes Cronenberg-esque weirdness and violence with a barbed and very funny assault on Hollywood in all its glorious egotism. Cronenberg and Wagner said it could be set anywhere, and maybe they’re right – but it’s not set anywhere, it’s set in Hollywood, and the setting is a perfect match for the filmmaking. When this thing starts screening in Los Angeles, it’s going to kill.

The “Twilight” kids step up. Nobody gave Robert Pattinson and Kristen Stewart much credit for their acting chops when the two starred in the “Twilight” franchise. But they’ve both done worthy work since then, and both showed up at Cannes with roles that won them acclaim. Pattinson appeared in two Cannes movies: “Maps to the Stars,” where he plays a limo driver and aspiring actor, and “The Rover,” a grim road movie set in Australia after an unspecified collapse that has left society a shambles. He won approving notices for the former – but David Michod’s “The Rover” is a revelation of sorts, with Pattinson holding his own as a none-too-bright drifter who teams up with co-star Guy Pearce. For her part, Stewart was almost unanimously acclaimed as the best thing about Olivier Assayas’ “Clouds of Sils Maria,” where she co-stars with Juliette Binoche and Chloe Grace Moretz as the personal assistant to Binoche’s movie star.

Godard goes 3D … from a distance. When festival director Thierry Fremaux announced that 83-year-old icon Jean-Luc Godard would have a film in the main competition, he added that Godard had promised to accompany his 3D movie “Goodbye to Language” to the festival. Apparently, Godard was lying – because, as usual, he skipped the festival. (He did sent a cryptic video that explained nothing.) But he made a big splash anyway, because “Goodbye to Language” won raves as an original and artful use of 3D, and a film that was as invigorating as it was incomprehensible. The film ended up winning the Jury Prize, which is essentially Cannes’ third-place award. Amazingly, it was Godard’s first Cannes award after more than 50 films.

Xavier Dolan behaves himself…for a while. Godard had to settle for a tie for the Jury Prize with 25-year-old Canadian wunderkind Xavier Dolan, whose extravagant “Mommy” won raves and briefly stirred up Palme d’Or talk for its look at an unhealthy mother/son relationship (a favorite topic of the prolific filmmaker, who’s already made five features). Although Dolan is known for being outspoken and bratty — he blasted the festival two years ago when his film “Laurence Anyways” was put in the Un Certain Regard section rather than the main competition — he gave an emotional and modest acceptance speech at the awards ceremony, thanking jury president Jane Campion and saying her film “The Piano” was the first movie he saw that made him want to write strong roles for women. And then, after his gracious speech, a reporter asked him about sharing the award with Godard, and he said, “I’ve seen maybe two Godard films and I really didn’t like them.” Well, the graciousness was nice while it lasted.

The Oscar race finds some contenders. Three years ago, three of the Oscar nominees for Best Picture made their debuts at Cannes: “The Artist,” “The Tree of Life” and “Midnight in Paris.” That hasn’t happened since and it’s not likely to happen this year, but the festival did showcase a number of films and performances that will likely be in the running when the Academy starts voting.

For starters, best-actress winner Julianne Moore will no doubt turn heads with her deliciously unhinged performance as an aging, desperate movie star in “Maps to the Stars.” Timothy Spall, who won the festival’s best-actor honors for playing the uncommunicative but driven artist J.M.W. Turner in Mike Leigh’s “Mr. Turner,” could well figure into what is always a brutally competitive category. And he’ll certainly have stiff competition from Steve Carell for his transformative, career-changing performance as John du Pont in “Foxcatcher” — while Spall won in Cannes, Carell may be an even likelier choice for Oscar voters. Hilary Swank and Marion Cotillard could also get some acting attention for “The Homesman” and “Two Days, One Night,” respectively, while the Un Certain Regard entry “The Disappearance of Eleanor Rigby” has a real shot at giving Jessica Chastain her third nomination.

In the Best Picture race, “Foxcatcher” is a strong candidate, with “Mr. Turner” less likely but clearly part of the conversation. And in the Animated Feature category, “How To Train Your Dragon 2” should easily move from its Cannes premiere to an Oscar berth. And a number of Cannes titles will no doubt be entered in the Best Foreign Language Feature category, though the selections are always dependent on the politics of each country’s selection body.

Will “Leviathan,” for instance, prove too much of a criticism of modern-day Russia to get the nod from a body that seems drawn to big, loud and usually not very good films? Other foreign-language possibilities include the Palme winner “Winter Sleep” (the director’s last film was Turkey’s choice), “Two Days, One Night,” “Timbuktu,” “Saint Laurent,” “Wild Tales,” “The Wonders,” “Mommy,” “Amour Fou,” “White God” and “Turist,” among others.

Sony Classics goes on a spree. Sony Pictures Classics came into Cannes with a company-record five films: “Foxcatcher” and “Mr. Turner” in the main competition, along with “Whiplash,” “Red Army” and “Coming Home” in other sections. Then, as soon as the festival started, SPC announced that it had bought another competition title, “Wild Tales” (a deal that had in fact been in the works long before Cannes, given the company’s longstanding relationship with the film’s producer, Pedro Almodovar). Later they bought another competition title, “Saint Laurent,” then added the rapturously received “Leviathan,” and then the Wim Wenders/Juliano Ribeiro Salgado documentary “The Salt of the Earth.” Three SPC films won awards at Cannes: best director for “Foxcatcher,” best actor for “Mr. Turner” and best screenplay for “Leviathan.”

Damian Szifron? Remember the name. Argentinian director Szifron was one of the least-known names in the main competition, but he showed up with one of the most bracing films. “Wild Tales” is uneven and messy, an anthology film made up of six different episodes with nothing in common except their black humor – but its best moments are so brutally, delightfully funny that it prompted repeated applause during its screenings. It’s not going to be an Oscar winner or anything, but the best parts of the film are so wildly entertaining that it’s hard to imagine that it won’t win over moviegoers who don’t mind their humor on the sick side.

“Eleanor Rigby” Works as One Movie…But. Ned Benson’s “The Disappearance of Eleanor Rigby” was an audacious and stunning feature debut when it premiered at the Toronto Film Festival last September: two different movies, one subtitled “Him” and the other “Her,” that played back-to-back and told the story of a relationship unraveling after a tragedy. A new, single-film version of “Eleanor Rigby” played at Cannes in the Un Certain Regard section, and will be released by the Weinstein Company in late September. (The company will then release the “Him” and “Her” versions as well.) The combined version is beautifully affecting, and it showcases marvelous performances from Chastain and James McAvoy, among others. But it also lacks the richness and texture of the extraordinary “Him” and “Her” versions. Here’s hoping that the original version gets a fair shake in theaters.

Ryan Gosling makes a statement. Gosling made his name as an actor in films like “The Notebook,” “Half Nelson,” “Blue Valentine” and “Drive,” but his heart may be in stranger, more forbidding work. At least that’s the conclusion you might get from seeing his directorial debut, “Lost River,” which premiered in the Un Certain Regard section to reviews that were mixed at best. A fantasy neo-noir with Christina Hendricks and Eva Mendes, the film won a handful of reviews that expressed admiration for Gosling’s daring, but for the most part it was savaged by critics. That put it in a company with Olivier Dahan’s “Grace of Monaco,” Atom Egoyan’s “The Captive” and Michel Hazanavicus’ “The Search” as the Cannes movies that drew the most negative reviews. In fact, in Indiewire’s CriticWire scoresheet, “Lost River” ended up with a grade of C-, the same as “Grace,” “The Search” and the Un Certain Regard flop “That Lovely Girl,” and lower than any other Cannes film except Panos Koutras’ “Xenia” and Andrew Hulme’s “Snow in Paradise.” The highest score, on the other hand, went to “Leviathan,” which got the only A score at CriticWire.

The art movie wins it all. The Palme d’Or race went through a lot of changes over the course of the festival. “Mr. Turner” was the first frontrunner, “Foxcatcher” picked up support, “Two Days, One Night” stirred up talk that the Dardenne brothers might be the first filmmakers to win their third Palme, “Mommy” grabbed the spotlight and “Leviathan” stunned critics to become the 11th-hour frontrunner. But in the end, Jane Campion’s jury went for a quiet film that had ranked high in a number of pre-Cannes forecasts, sight unseen: Nuri Bilge Ceylan’s three-hour-plus “Winter Sleep,” a gorgeously composed, painstakingly slow and talky look at a small, snowbound town in Anatolia. It was probably the boldest choice since “Uncle Boonmee Who Can Recall His Past Lives” won four years ago — and given a glacial pace that will no doubt restrict it to arthouse distribution, it could well be the least commercial Palme winner since then. Ceylan’s last film, the acclaimed “Once Upon a Time in Anatolia,” had a U.S. gross of $152,408. “Uncle Boonmee” grossed $184,292. The three Palme winners since “Uncle Boonmee” were “The Tree of Life” at $13.3 million, “Amour” at $6.7 million and “Blue is the Warmest Color” at $2.2 million.