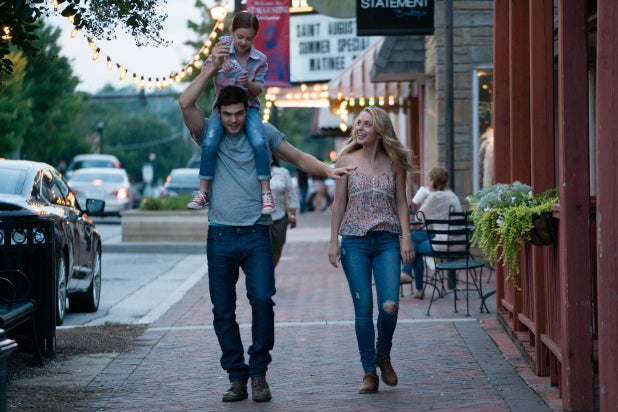 An international superstar and tabloid target returns to his picturesque hometown, where he encounters the long-estranged high-school sweetheart who despises him before finding herself back in his arms. If this basic plot scenario sounds familiar, it’s because “Forever My Girl” is one ice-carving contest away from being a Hallmark Channel Christmas movie.

That’s not even fair to the Hallmark movies, which would have at least given the female lead something of a personality and a plot arc; this movie’s all about the celebrity and his emotional journey, while the woman stands around like a prize waiting to be won, the Blessed Hometown Honey.

It’s a surprise, then, that the writer-director of “Forever My Girl” is a woman, Bethany Ashton Wolf (“Little Chenier”), whose main accomplishment here is making a movie that seems like a faith-based story (the country singer is a preacher’s kid) but isn’t (alcohol is casually consumed, Jesus is barely mentioned).

Eight years ago, Liam Page (Alex Roe, “The 5th Wave”) bolted from the small town of St. Augustine, Louisiana, ditching his fiancée Josie (Jessica Rothe, “Happy Death Day”) at the altar to pursue his dreams of fame. Now he’s packing arenas and turning up on the cover of supermarket magazines — the art department does a terrible job mocking up fake versions of People and Us — and completely miserable.

When he learns that a childhood friend has died in a car accident, Liam walks out on his tour to go home for the funeral, where he’s forced to face not only Josie but also his disapproving father Brian (John Benjamin Hickey). It’s not long before Liam encounters Josie’s seven-year-old daughter Billy (Abby Ryder Fortson, “Ant-Man”); doing the math, both Liam and Billy figure out what’s up — he had no idea Josie was pregnant when he walked out — and the two begin tentatively forging a father-daughter relationship.

Even a casual Hallmark viewer will track this story through every predictable beat, from Josie allowing Liam to sweep her off her feet to the revelation of past secrets that conveniently explain Liam’s bad behavior to the moment where it looks like all will be lost. (There’s even a dead rose garden that’s brought back to life, lest anyone miss the metaphor.) Movies like this are about the journey rather than the destination, yes, but as road trips home go, this one’s a slog.

Roe has matinee-idol looks — he comes off like a lab-splicing experiment involving Joshua Jackson, Jason Priestley and a set of eight-pack abs — and the British-born actor nails the Louisiana accent well enough, but he’s never convincing as either the love of Josie’s life or the kind of music dynamo who can enrapture thousands of people from the stage. It certainly doesn’t help that the movie can’t decide whether or not Liam has a substance-abuse problem.

Meanwhile, both Rothe and Forston give it their all for a script that lets both down; Josie comes off as something of a non-entity while Billy says the sort of adorably precocious bon mots that only happen in bad screenplays.

Cinematographer Duane Manwiller (“The Walking Dead”) bathes the small town in a golden light, but the camera isn’t always where it needs to be: when Liam and Josie first reunite, she gives him a well-deserved punch in the stomach, but it’s shot from behind Liam, and at a bit of a distance, which diminishes the moment.

Even Liam’s country hits are fairly forgettable, although “Forever My Girl” does throw in a Travis Tritt cameo so that fans of the genre don’t go home completely empty-handed. Aficionados of Nicholas Sparks movies may swoon over this film’s distressed T-shirts and kudzu-choked back roads, but lovers of love stories deserve much better.