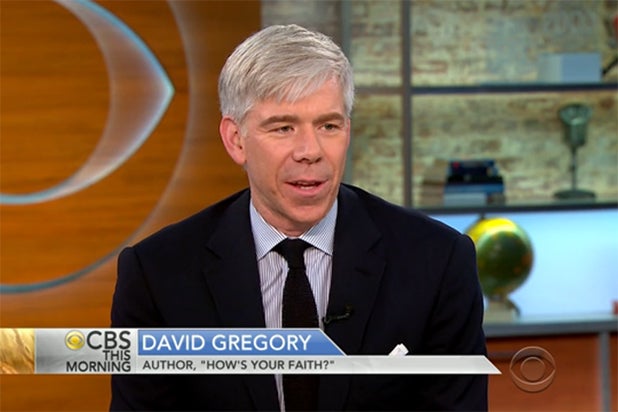 One year after exiting NBC News as moderator of “Meet the Press,” David Gregory is breaking his silence about his departure from the network.

“It was handled in a way that was unnecessary. NBC made a business decision which you can agree with or disagree with. It just didn’t need to be handled that way, and the process of it was difficult,” Gregory told “CBS This Morning” Wednesday, in his first television interview since leaving NBC.

The veteran journalist, who spent 20 years at NBC, also admitted to his own shortcomings.

“I tried to, rather than get into the nastiness of it, I tried to internalize what I take away from it, what I could’ve done a little better in terms of how I could’ve treated people so people would’ve been rooting for me in terms of within NBC and in the broader community,” Gregory said.

Gregory appeared on the morning news program to promote his book, “How’s Your Faith?,” which chronicles his spiritual journey over the last few years. It also addresses his split with NBC, which Gregory says he doesn’t regret.

“There’s peace because as much as I miss the work… I don’t miss NBC, I don’t miss being there. It was just the wrong atmosphere for me,” he said.

Gregory announced the end of his six-year run as host of “Meet the Press” on Twitter in August 2014, writing “I leave NBC as I came – humbled and grateful.” He was immediately replaced by MSNBC’s Chuck Todd.

The shakeup followed months of speculation that NBC would replace Gregory after its flagship Sunday news program slid to third place in the ratings behind CBS’ “Face The Nation” and ABC’s “This Week,” with Gregory as host.

However, in the interview Wednesday, Gregory insisted he left NBC on his own and was not fired.

“The truth is I was not going to be fired then but I felt I was going to be… I had said to NBC look if you don’t shore me up, this was Washington, there was blood in the water, if you don’t shore me up because leaks that are coming from within NBC are very hurtful to me,” he said. “It’s getting in the way of what we’re trying to do for the show. So if you’re not prepared to do that and they were not prepared to shore me up over the long term, it was time for me to go.”