It only took 79 years but at long last we’re actually, really getting a big budget adaptation of Isaac Asimov’s “Foundation” series. And ahead of the show’s Sept. 24 premiere on Apple TV+, you can watch the official trailer at the top of the page right now.

For those just walking into the room, “Foundation” is a multigenerational story that begins with Professor Hari Seldon, creator of a new kind of math called “psychohistory,” who has figured out beyond any doubt that the Galactic Empire, which by all accounts is in the middle of a golden age, is about to enter a rapid and irreversible decline. Its collapse is inevitable and unavoidable, and what will follow is interstellar anarchy, constant centuries of warfare and a dark age lasting 30,000 years, before a new galactic empire will arise.

But Seldon has a plan that might prevent the worst from happening: Create an organization dedicated to preserving the knowledge and cultural heritage of the galaxy, in hopes that this will reduce the dark ages to a mere thousand years.

Of course, readers of the novels know Seldon’s plan is a lot more complicated than that, but we won’t spoil anything else, other than to say Asimov was inspired by Edward Gibbon’s “History of the Decline and Fall of the Roman Empire.” 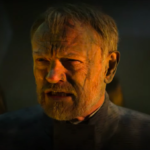 The trailer is focused primarily on Seldon (Jared Harris), Seldon’s protege Gaal Dornick (Lou Llobell), and the galactic emperor (Lee Pace). But it also has some truly spectacular scenes and an emotional core that remind us at least of Jared Harris’ other prestige science fiction from the last few years, “The Expanse.” (NOT a complaint.)