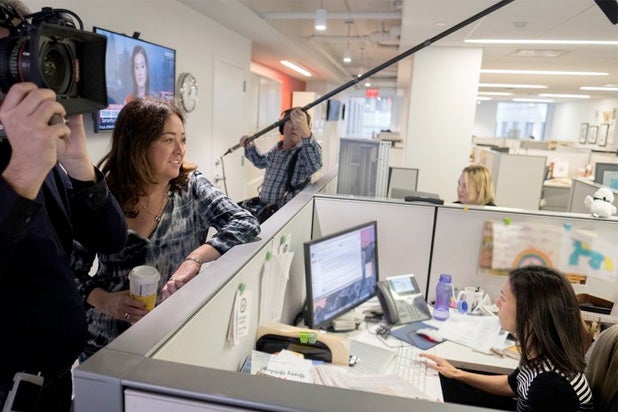 The American press, or the “The Fourth Estate,” is under steady attack throughout the first episode of this documentary series for Showtime. Director Liz Garbus takes us inside the newsroom of the New York Times during the first months of the scandal-ridden Trump administration, and she reveals the challenges that the reporters face on a daily basis.

A lot of what we see in the first scenes looks like impotent wheel-spinning, as the journalists try to figure out how to cover a president who is openly hostile to them. We see them patting themselves on the back a lot, and this expresses the insecurity of their position. The New York Times is in competition with the Washington Post, and we watch how they try to beat each other on stories, but there is little genuine excitement in what we see these reporters doing; there is instead a constant low-level sense of dread.

The conversation we hear is peppered with the qualifying words and phrases that have crept into and degraded American vernacular: “kind of” and “sort of” turn up all the time in meetings. And the man who became president doesn’t qualify anything, unless he’s trying out one of his verbal evasions that are reliant on conspiracy theories or worse.

White House correspondent Maggie Haberman is heavily relied on in the Times newsroom as a source for Trump information and Trump character analysis because she has been covering him since she worked at New York tabloids in the 1980s. He used to give her quotes to “juice” her articles then, and it is clear that she is beyond tired of having to deal with him.

Haberman often openly admits to being drained of energy, and she is stuck in a disbelieving, defensive persona. What she really wants to do is get back to her children, and she talks about how she thought her coverage on the Trump beat would finally end when he lost.

Garbus shows Haberman having to take a call from one of her children while she tries to do an interview for a podcast, and the way Haberman crouches on the floor of the office while she attempts to reassure her child is an image of helplessness that epitomizes what most of the people in this movie are feeling.

If there is a star in “The Fourth Estate,” it may be Washington bureau chief Elisabeth Bumiller, a very tough, skeptical journalist who knows how to separate what is important from what isn’t, which turns out to be a particularly crucial skill for covering this particular White House. There’s an exciting scene where Bumiller reacts incredulously when she sees that her lede has been watered down, and we see her defiantly trying to get some of her original intent back into the top of the story.

It says something about this administration that the scandals covered in “The Fourth Estate” feel like they happened in an already distant past even though they occurred just a little over a year ago. There is the start of the scandal about Russian interference with the 2016 election, and then the turnovers and resignations of officials close to Trump, and the reporters write about these things in all seriousness and with all due diligence.

It is made clear that the New York Times needs money, and that Facebook and Google are eating into their business. “We’re not driven by clicks,” says Time publisher A. G. Sulzberger. “We think in decades.” But there is the very uneasy sense that the foundation of newspapers like the Times is fragile, especially when we see Trump attacking the press as any dictator would.

Trump himself is seen giving speeches throughout, and we hear him on the phone with Haberman, who has to listen to his off-the-record profane anger. The thing that makes Trump so hard to fight is that he is such a comic figure on the surface. His face often takes on the supercilious look of a grand female dowager, like Margaret Dumont, before it folds back into the cartoonish grin of a minor fat-cat capitalist. Haberman says that Trump’s greatest dream is to be taken seriously, and she says that he is searching above all for respectability.

“The Fourth Estate” ends on a cliffhanger that is supposed to whet our appetite for future episodes, but surely many of us are waiting for this whole thing to be finished. Everyone in this movie seems to be wondering how long we have to wait for the end of this publicity stunt gone wrong. But if we are in for a long haul, it feels as if Bumiller is the one who can best lead us through it.