Ahead of the relighting of Fox News’ outdoor Christmas Tree Thursday, the network’s morning show hosts said the fire that destroyed the original was “a hate crime.”

Steve Doocy explained, “Here’s the thing: In New York, under the new liberal bail reform policies, arson is only a felony. You can only be held if it’s a felony if the suspect tries to harm a person or commit a hate crime, and apparently lighting a Christmas tree on fire is not a hate crime.” 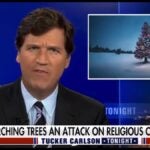 Fox News reported that when the suspect left the courthouse Wednesday, he told reporters gathered there that he “didn’t do it.” He faces additional charges, including criminal mischief, reckless endangerment and criminal trespass. Per the New York Post, which shares the News Corp building outside of which the blaze took place with Fox News, all of the charges, including arson, are misdemeanors.

Fox News Media CEO Suzanne Scott sent a staff-wide memo Wednesday alerting Fox News employees to the Wednesday relighting ceremony, which she said will be “a sign of resilience and hope in the face of a horrible act.” Earhardt and Doocy will both participate in the relighting.

She also noted that Fox News Media and Fox Corporation both made $100,000 donations to Answer the call, which financially assists the families of fallen New York police officers and fire fighters. She expressed gratitude to the New York Police Department and New York Fire Department for responding to Wednesday’s fire “immediately.”

In addition to Earhardt and Doocy, other Fox News Media talent like Lawrence Jones, Abby Hornacek, Janice Dean, Mike Rowe and Pete Hegseth will participate in the relighting, as will New York Archbishop Cardinal Timothy Dolan, Reverend Jacques DeGraff, Rabbi Josh Potasnik and members of the FDNY and NYPD.